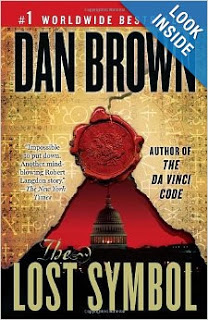 The Lost Symbol by Dan Brown
(Summary taken from the inside book jacket) “In this stunning follow-up to the global phenomenon The Da Vinci Code, Dan Brown demonstrates once again why he is the world’s most popular thriller writer. The Lost Symbol is a masterstroke of storytelling–a deadly race through a real-world labyrinth of codes, secrets, and unseen truths…all under the watchful eye of Brown’s most terrifying villain to date. Set within the hidden chambers, tunnels, and temples of Washington, D.C., The Lost Symbol accelerates through a startling landscape toward an unthinkable finale. As the story opens, Harvard symbologist Robert Langdon is summoned unexpectedly to deliver an evening lecture in the U.S. Capitol Building. Within minutes of his arrival, however, the night takes a bizarre turn. A disturbing object–artfully encoded with five symbols–is discovered in the Capitol Building. Langdon recognizes the object as an ancient invitation…one meant to usher its recipient into a long-lost world of esoteric wisdom. When Langdon’s beloved mentor, Peter Solomon–a prominent Mason and philanthropist–is brutally kidnapped, Langdon realizes his only hope of saving Peter is to accept this mystical invitation and follow wherever it leads him. Langdon is instantly plunged into a clandestine world of Masonic secrets, hidden history, and never-before-seen locations–all of which seem to be dragging him toward a single, inconceivable truth.”
This book is a typical Dan Brown book. I liked it, but it was very formulaic and somewhat predictable. The places, names, and institutions involved may be different from his previous books, but the story is very similar. There is the evil guy, Mal’akh, and he wants something. In order to get it, he has to kidnap someone and torture him, and then Robert Langdon is there, of course, to figure out the meanings in the symbols. Robert will hopefully save the day with his knowledge. There’s a girl too.  At the beginning of the book, Mr. Brown states that, “All rituals, science, artwork, and monuments in this novel are real.” You can definitely tell that Mr. Brown did his homework and knows a lot about the different rituals in Masonry, and the science of Noetics. I did find all that information very interesting and would like to know a little bit more about it. I liked Katherine, Warren Bellamy, and Dean Galloway. I thought they each added something a little different to the story and thought they were written well. Mr. Brown definitely toned this book down. I thought Angels and Demons was a little too much, and this one brought it down a notch, which was good. The language wasn’t as bad, and the evil character was evil and insane, but not quite as grotesque as in Angels and Demons. Don’t get me wrong, there are some yucky scenes that are hard to read, but they are not as bad as they were in other books. I did like the book okay, and there were some things that I did really like, but it just didn’t capture my attention like Mr. Brown’s previous books did. I may have been in the wrong frame of mind to read it. I was in a really bad car accident a few weeks ago and was really stressed to find a new car and deal with insurance companies, and even though I did read, my mind wasn’t too into it. If you like Mr. Brown’s books, you will most likely like this one.
Rating: R (This does not follow the movie ratings exactly, it is just my way of saying it is not appropriate for younger readers.) Language, murders, torture scenes.
Recommendation: 18 and up