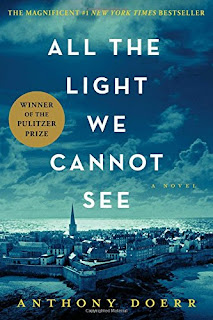 All The Light We Cannot See by Anthony Doerr

“Marie-Laure lives with her father in Paris near the Museum of Natural History, where he works as the master of its thousands of locks. When she is six, Marie-Laure goes blind and her father builds a perfect miniature of their neighborhood so she can memorize it by touch and navigate her way home. When she is twelve, the Nazis occupy Paris and father and daughter flee to the walled citadel of Saint-Malo, where Marie-Laure’s eclusive great-uncle lives in a tall house by the sea. With them they carry what might be the museum’s most valuable and dangerous jewel. In a mining town in Germany, the orphan Werner grows up with his younger sister, enchanted by a crude radio they find. Werner becomes an expert at building and fixing these crucial new instruments, a talent that wins him a place at a brutal academy for Hitler Youth, then a special assignment to track the resistance. More and more aware of the human cost of his intelligence, Werner travels through the heart of the war and, finally, into Saint-Malo, where his story and Marie-Laure’s converge.”

There is something about that World War II era that makes a really good book! I have read so many great books about WWII, and this one definitely fits right up there with the best of them. I like the angle on this book; it’s so different and unique that it grabs your attention from the beginning. It’s very well written. The descriptions are done so well that you feel as if you can feel the spray from the ocean and hear the roar from the airplanes above. You feel like you are in the house with Marie-Laure and as if you are sitting next to Werner and Jutta as they listen to their radio. It does get a little confusing because it jumps time periods, and the time periods are relatively close together, but once you figure out who is who and where they are in the time periods then it’s not difficult to figure it out. The characters in the story are lifelike and real. They feel like your closest friends. Marie-Laure is an amazing character. Her determination, abilities, and strength are an inspiration. Werner is well done as well. I liked that he wasn’t perfect. He’s young, but his abilities put him in a situation that is way above his years. He handles it well, but I like that he struggles and learns along the way. The other characters are in supporting roles, but they play a big part. I liked Frau Elena and Jutta, and I thought it was interesting to see how their characters influenced Werner. Frederick’s tale is heart wrenching, and I could see how what happened would eat at Werner through the years. I liked Volkheimer and enjoyed seeing his different sides. Madame Manec and Etienne were both characters that influenced Marie-Laure, and helped her along the way. Etienne’s growth throughout the book is fun to watch, and it makes you realize the things caregivers will do for their children. It took me a minute to figure out how the stories would come together in the end, but the transition was seamless and meant to be. Even though the story is somewhat depressing, it also helps you see inspiration in little things. It gives you a window into some difficult situations, and allows you to see light where there might not be any.  We read this in my book group this month, and I think it’s a great pick. I definitely recommend it.

Rating: R (This book contains profanity, including several “f” words. There is a difficult-to-read rape scene, and many innuendos-some of them a little shocking.)

Recommendation: Adult (This book is not appropriate for YA or younger readers.)