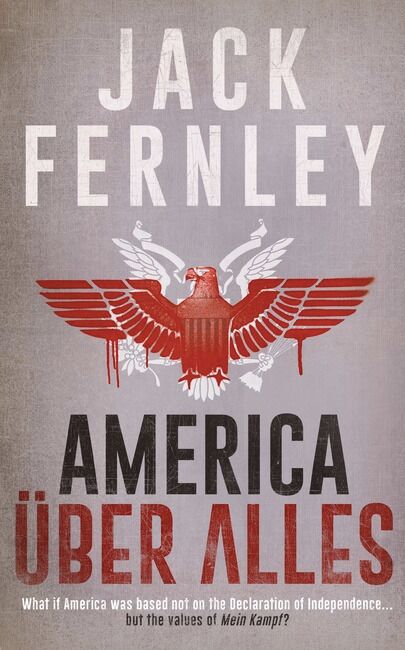 I have always loved studying about the American Revolution. It’s one of my favorite topics to learn about. I have read 1776 by David McCullough several times, along with Revolutionary Summer by Joseph Ellis and a few others. Usually I read the nonfiction history books. This time I thought it might be interesting to read a historical fiction book about it. What did I think? Was it a good choice? Find out in my book review of America Uber Alles by Jack Fernley.

“What if America was based not on the Declaration of Independence, but the values of Mein Kampf?

Germany, April 1945. As the Russians close in on Berlin, a lone plane flies into the city. On board are General Robert Ritter von Greim and the Nazi flying ace, Hanna Reitsch, summoned by Hitler to his bunker. There, the Führer reveals Germany’s secret weapon – a weapon he believes will win the war for the Nazis and change the course of history for ever.

America, December 1776. George Washington and his army are close to collapse, the War of Independence is almost lost. The British army scent victory, aided by the arrival of extraordinary German mercenaries. However, when the Germans offer the Americans secret intelligence to allow a surprise attack on their supposed allies, it becomes clear that all is not as it seems. Who are these Germans and what are they fighting for?

Fast-paced, thrilling and thought-provoking, America Über Alles imagines a world in which the American War of Independence becomes a struggle for democratic values against fascist ideology; perfect for fans of SSGB and The Man in the High Castle.”

When you know and love a topic really well, it’s difficult to keep an open mind. It’s hard to accept new ideas about it, even if they’re fiction. Even though you’ve never met the actual players, you feel like you know them. You know their thoughts, behaviors, and values, and nothing can change your opinion of them. That’s how I feel reading this book. I’ve studied a lot about the American Revolution and its key players. Accepting many of the points in this book is pretty much impossible for me. I tried though.

The author also spent a lot of time building up to why the people would accept a new way of thinking. Although I hope I would see it for what it was, I could see how people would embrace the thought of it. I don’t think they’d fully embrace it if they knew the actualities of it, but it’s happened before. It had to be a very subtle change over time.

The second half of the book had a definite change in tone. This half of the book focused more on the people in the Revolution. For much of the second half I hated the book. I seriously could not wrap my head around anyone going along with any of it. I found it scary how fast people changed their whole belief systems. With everything I’ve read about the Founding Fathers, I could not see how any of them would accept this.

The soldiers are a different story. They were suffering hardships, and they were a ragtag band of soldiers. Unfortunately, I could see why they would like the idea of being fed, having shoes, uniforms, and a nice place to sleep. However, I also didn’t see why they would fight for Nazi values after all they’d been through. Trading one form of tyranny for another isn’t a great option.

Towards the end of the book I started not hating the book and just disliking it a lot. I truly could not see any of the Continental Congress or Founding Fathers just standing by or accepting the Nazi values. Once again, I didn’t personally know any of them. However, my brain can’t comprehend them allowing someone else to plow over their ideals. The American Revolution, along with its values, cause, and purpose is too ingrained in me to accept anything less.

Just when I thought it all might be ok, the book ended. Yep, just up and ended. Nope, I wasn’t a fan of the ending. It could have used another twenty pages or so to finish things off. It left off with a lot of holes. There were many things that I thought should have been explained, but I was left hanging. That disappointed me, for sure.

Overall, it was ok for me. Maybe a non-American would have an easier time accepting it as a possibility. I guess I did find it interesting to think about how perfectly everything came together in reality. It could have just as easily gone the other way. What would life be like now if it had?

Rating: R (There is profanity in this book, including many “f” words. There’s also some “intimacy,” including scenes, innuendos, and discussions of rape. There is quite a bit of violence including war atrocities, murder, bombings, hangings, fighting, and the death of several characters.)