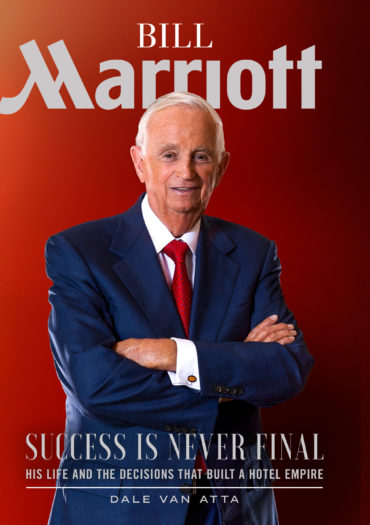 I have a love/hate relationship with biographies of successful people. This book talks about what Bill Marriott was doing when he was my age, how much money he’d earned, and the success he’d achieved, and it makes me feel a little underwhelmed about my own achievements. I know it’s not fair or productive, so I don’t dwell on it, but…wow.  Maybe I need to up my game? Get into the hotel business? Nah, I guess raising a family and teaching sixth graders has its own importance, and it’s what I love. So I’ll stick with it for now. It does go to show you what you can accomplish if you work hard, and that’s a take-away we can all learn from. I hope you enjoy my book review of Bill Marriott: Success is Never Final by Dale Van Atta.

“Bill Marriott—son of J. Willard Marriott, who opened a root-beer stand that grew into the Hot Shoppes Restaurant chain and evolved into the Marriott hotel company—grew up in the family business. In his more than fifty years at the company’s helm, Bill Marriott was the driving force behind growing Marriott into the world’s largest global hotel chain.

Bill Marriott: Success is Never Final gives readers an intimate portrait of the life of this business titan and his definition of success. Bill shares details about his private struggles with his domineering father’s chronic harsh criticism; his innovations in the hotel industry; and the boundless passion and energy he demonstrated for his work, family, and faith. Bill also shares spiritual experiences that allowed him to recognize God’s guidance in his personal life.

This is the remarkable story of a man who had the vision to create a multibillion-dollar business, who understood the power of giving, and who lived the creed that hard work will pay off but success is never final.”

I’ve stayed in Marriott hotels before, and I’ve seen them as we’ve traveled, but I didn’t know very much about its beginnings or the man who took it to the top. Now I know a lot about each of those things, and lots of other stuff as well! This book is VERY detailed. I’m not sure how anyone can remember so much from so long ago. I know that both Bill Marriott and his father, J. Willard, kept good journals, and I have to say that it paid off. There is so much information in this book! It even goes into detail about the Marriott ancestors that crossed the plains to end up in Utah.

Not only does it chronicle Bill’s life, but it goes in-depth into his father and mother’s upbringings as well. There is a lot about the relationship between Bill and his father. Unfortunately, most of it doesn’t sound very good. This book goes step-by-step into how the Marriott company began and evolved over the years. I had never heard of a Hot Shoppe restaurant before. Have you? They sound like quite an adventure! I found it interesting to learn about several things Bill tried that didn’t do very well. Did you know he owned a cruise ship? Or a few theme parks? Crazy, right?

Bill Marriot: Success is Never Final is well written. As I stated previously, it’s VERY detailed. There were a few things that I didn’t really care to know, but it was interesting to see how everything shaped Bill’s life in the way it did. I can tell that this book was very well researched. I thought the book flowed well; it was mostly easy to read and understand. There were a few technical paragraphs talking about stocks or financing that I didn’t know anything about. Unfortunately, I didn’t understand them as well.

My favorite thing about this book was to see Bill’s drive, work ethic, and devotion to his family and faith. I’m not sure how he fit it all in! I’m sure he didn’t want some of his failures to be brought up, but it was also good to see that he is just a normal guy who makes mistakes and learns from them. His work ethic and charity are such a good example of what you need to do to succeed at something.

Content Rating: PG-13 (Although there is not a ton, there is some profanity in this book.)