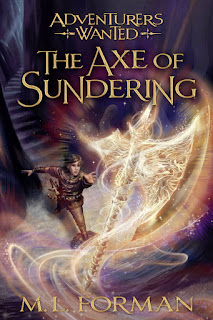 Adventurers Wanted: The Axe of Sundering (Book #5)
by
M.L. Forman
Blurb:
“Whalen Vankin is a great and honorable wizard, and he has only ever personally trained two other wizards. One is Alexander Taylor, a young man who has earned a reputation as a brave adventurer, a warrior, and a man of honor. They other is Jabez, Vankin’s nephew–a man whose choices have led him down a different, darker path. Dark magic has covered Westland, and evil is stirring. Whalen and Alex must journey together into the heart of danger, confronting a sea serpent, and facing down more than one dragon. Alex must find the legendary Axe of Sundering–the one weapon that offers a chance to defeat Jabez–and protect the land from  the dark wizard’s plans. But finding it will be an adventure of its own as the only pathway to the Axe leads through the underground tunnels and secret passages of the Castle of Conmar. But Jabez has a final weapon at his disposal: the powerful Orion stones, which could spell the end to Whalen and Alex both.”
My Review:
May I just say how much fun this series has been? My boys have read lots of books and series (they are now 16 and 14) and this series is high up there as one of their favorites! My 14 year-old put this book on hold at the library a couple of years ago, because it’s anticipated date of publication was back then, and it was on hold for a year. After the year was up I redid it and it was on hold again for awhile, then the library took it off. My son asked every couple of months if this book was out yet. There were some complications in getting this book written and published; I think the author was very sick or something. Needless to say, at my house, the anticipation for this book was enormous! So, when I was asked to review it, of course I said, “Yes!” And, both of my sons read it before I did; they were so excited! Did it let them down? Nope! (Thank goodness!) The Axe of Sundering is a great end to the series. I will really miss reading about Alex and his amazing adventures. This book has some great twists and turns, and there are a few times that you are very worried about both Alex and Vankin. Will they pull out of this one? Will they be able to defeat all this evil? They both put themselves in some sketchy situations in order to try and defeat the Brotherhood and its leaders. I missed having the familiar adventurer friends in this book, but some new friends were introduced, and by the end they had won my  approval. I just love the creativity of M.L. Forman; what an imagination! The concept of the Axe of Sundering is quite clever, and the different places that Alex and Vankin travel are so unique and interesting. This book, along with the rest, is well written, the character development is great, it is exciting and full of adventure, and it’s a great end to the series. There were some unanswered questions and a few things left undone, but I know the author’s health was not great, and I’m glad he persevered to finish. I loved the twist at the end, and thought it was very fitting! I highly recommend this book, and the whole series!
Rating: PG+ (There is no profanity or “intimacy,” but there is quite a bit of violence. They are in the middle of a war against evil, and there is quite a bit of fighting. Some prominent characters die; some of the deaths are a bit graphic.)
Recommendation: 4th or 5th grade and up (Perfect for middle-graders and YA readers…and their moms!)
Disclosure: I did receive a free copy of this book in exchange for my honest review.
Adventurers Wanted Series:
(Click on the images to find out more about each book!)