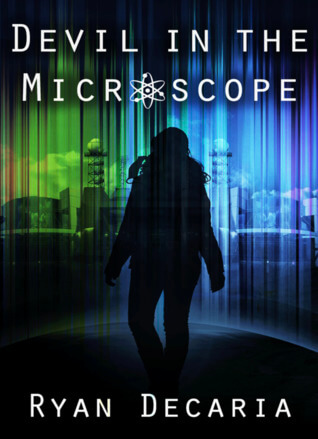 [Book Review] Devil in the Microscope by Ryan Decaria

“When “science-fair-geek” Anika goes to live with her scientist father in a town built around his mysterious genetics laboratory, she is determined to prove herself worthy of his legacy. But all preconceptions about her new life are thrown out the window when Anika discovers her father is a megalomaniac living in a town populated entirely by mad scientists. Now Anika will have to navigate her way through a high school filled with vindictive evil geniuses, deadly science projects, and unspeakable human experimentation. Relying on her wits, scientific know-how, and talented allies, Anika fights for her very life, and the lives of her new friends. Will Anika have to become like her mad scientist father in order to save the day?”

Anika is a fun character. She’s smart, witty, sassy, and doesn’t put up with anything. She’s a good, strong, female leading character. I liked her voice a lot, and thought she was well developed. It’s always good to have a science nerd as a main character. Her mom isn’t in a lot of the book; even though she’s a bit mysterious, you find out more about why she is the way she is as the story goes on. I did think that Anika was a bit quick to disregard her mom after all they’d been through together, but teenagers are never predictable. I liked Billie a lot, and felt so bad for her and the situation she was in. Anika’s father is quite the interesting guy. I didn’t feel like he was developed as much as Anika was, but part of that is the mystery that surrounds him. Anika doesn’t know him very well either, so I guess it’s fair that the reader is also kept in the dark.
I liked the story line a lot at the beginning, with the science fair and all that. It was when Anika got to Moreau that the story became a little unbelievable to me (you may not feel the same way). It’s sci-fi, and you know I love a good sci-fi, but this definitely bordered on fantasy, and was a little hard to believe. I liked her friends at school, especially Misty and Sasha, and I did think they were well developed and likable characters. Victor is scary, creepy, and intimidating, but his situation is a bit on the unimaginable side. Well, honestly, a bunch of the characters have sides of them that are unimaginable. On one hand, it gives the story a lot of action. It’s definitely full of action, Anika is a go-getter for sure! On the other hand, some of the scenarios are a tad on the strange/inconceivable side.
I liked that the teenagers took matters into their own hands because they really didn’t have anyone they could turn to for help, but at the same time, that included them doing some things that I don’t think teenagers should have to do. I wanted to scream at their parents for putting them in that situation. You never really heard anything about their mothers, either. Where were they in all of this? The ending wasn’t my favorite, either. It just ended. I’m assuming that means that a second book is in the works, but there were still quite a few things that could have been tied up a little better. Overall, the book was ok for me. There were some parts of it that I really enjoyed, and some parts that I had a hard time believing. If you’re a science nerd then you will definitely enjoy this book.

Rating: PG-13 (There is some profanity, and there are times where they don’t actually say the “f” word, but they say a word that is VERY similar, so you know that’s what they mean, which is a tactic I don’t particularly care for. There isn’t any “intimacy,” but there is a lot of violence. There are a few characters that are killed, and there is a lot of fighting.)

Age Recommendation: 14 years-old and up

Disclosure: I did receive a free copy of this book in exchange for my honest review. Also, the author is the son of my good friend.