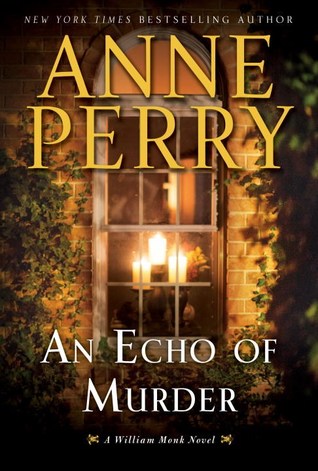 [Book Review] An Echo of Murder: A William Monk Novel by Anne Perry

One day last fall, this book just showed up in my mailbox. Best day ever, right? I’m assuming it came from the publisher, but I’m not sure? So, thank you to the mystery sender! I hope you enjoy my book review of An Echo of Murder: A William Monk Novel by Anne Perry. And feel free to send me books any time you want to!

“In this riveting new William Monk novel, Anne Perry delves into the diverse population of Victorian London, whose disparate communities force Monk to rethink his investigative techniques—lest he be caught in the crosshairs of violent bigotry.

In the course of his tenure with the Thames River Police, Commander Monk has yet to see a more gruesome crime scene: a Hungarian warehouse owner lies in the middle of his blood-sodden office, pierced through the chest with a bayonet and eerily surrounded by seventeen candles. Suspecting the murder may be rooted in ethnic prejudice, Monk turns to London’s Hungarian community in search of clues but finds his inquiries stymied by its wary citizens and a language he doesn’t speak. Only with the help of a local pharmacist acting as translator can Monk hope to penetrate this tightly knit enclave, even as more of its members fall victim to identical brutal murders. But whoever the killer, or killers, may be—a secret society practicing ritual sacrifice, a madman on a spree, a British native targeting foreigners—they are well hidden among the city’s ever-growing populace.

With the able assistance of his wife—former battlefield nurse Hester, who herself is dealing with a traumatized war veteran who may be tangled up in the murders—Monk must combat distrust, hostility, and threats from the very people he seeks to protect. But as the body count grows, stirring ever greater fear and anger among the Hungarian émigrés, resistance to the police also increases. Racing time and the rising tide of terror all around him, Monk must be even more relentless than the mysterious killer, or the echoes of malice and murder will resound through London’s streets like a clarion of doom.”

I haven’t read a murder mystery in a long time, so I enjoyed this fun change of pace. As a reader, I thoroughly enjoyed delving back into Victorian London and learning about the Hungarian population there. Monk and his wife Hester seem like they’re very good for each other. It would be difficult to be a detective, especially when a murder is so gruesome. Consequently, having a good support system around you would be a necessity.

Along with the murder mystery comes the story of Crow and Will. Will is the adopted son of Monk and Hester, and he is one of my favorite characters. Will works as an apprentice for Crow, who is a doctor in a clinic. When they need a translator, Will finds Fitz, and he turns out to be quite helpful. I liked both Crow and Fitz as well. They work well together, and it’s fun to see Will learn and gain more responsibility.

At first, all the different characters confused me, but it didn’t take long to figure it out. I liked the writing style and thought it flowed well, was easy to read and understand, and did a good job of grabbing hold of your attention. Ms. Perry developed the characters very well. Although each has a hint of mystery with an uncertain past, I thought that added to the story. The title, An Echo of Murder, fits the story well. It doesn’t smack you in the face, but it doesn’t take a long time to figure out either.

I kept changing my mind about who I thought committed the murder, which is a sign of a good writer. There was a bit of a twist at the end, which made figuring it all out more difficult. I enjoyed this book a lot; it made me remember how much I enjoy reading mysteries.

Rating: PG-13 + (There’s some profanity, and although there aren’t any “intimacy” scenes, there are a few innuendos and things are implied.  There is a little bit of violence, but the thing that warrants the higher rating is that the murder scenes are quite graphic and gruesome.)

Age Recommendation: 16 years-old and up