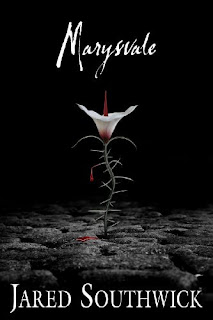 “John Casey was ten years old when his mother was murdered…and ten when his father hid the truth from him. Without that knowledge, he has no idea of the enemies that lie in wait. Now grown up, John lives a solitary life, in a world enslaved by ignorance and superstition, when anyone unusual is treated with distrust and even killed…and John has some very unusual gifts. When he is accused of witchcraft, John does the only thing he’s ever done–Run! That is, until he meets Jane who lives in the bleak, imprisoned town of Marysvale. Life outside the safety of the town walls means certain death from the brutal monsters that hunt there. However, life inside, under the rule of a tyrannical leader, means no life at all. As the love between John and Jane grows, the dangers of Marysvale unfold; and for the first time in his life, John discovers that there is something worth dying for.”

I really liked this book. I like Mr. Southwick’s style of writing. It is fast-paced and keeps you on your toes. I couldn’t just stop at the end of the chapter, I’d have to keep reading, which turned into some very long nights. I really liked the character development in this book. I felt connected to each of the main characters, and even to some of the characters that only appeared once or twice, like the man who saves John when he is running from the town authorities. The descriptions Mr. Southwick uses to describe the characters make you feel as if you are actually face to face.  I liked the story line even though I sometimes have trouble relating to “monsters.” In this book the “monsters” seemed plausible and were scary. I read a lot at night when I can’t sleep, and can usually read on the couch, but with this book I had to read in bed with my husband next to me because it kind of freaked me out in the dark.

I liked that there was none to very little language in this book. I can’t remember any profane words, but there may have been one that I can’t remember. There is violence, and some of it is scary and graphic. There is a lot of “monster” killing, and fighting. There is a section that talks about human slavery, which I didn’t really like, and thought it was graphic, but it only lasts a page or two. There are deaths in this book, and it can be dark at times, but there are also light-hearted and tender moments. There is some romance going on with kissing. One part that was quite disturbing was when John had to listen to two of his girl friends (not girlfriends) be tortured. You find out that it was only physical, not sexual, but during the scene it is almost implied. That scene was disturbing.

Overall I really enjoyed the book. There is a theme going on about how people will choose to lose their freedoms in order to be safe. I know this argument goes on every day here in the United States of America, and it was interesting to see why these people chose to give up their freedoms, and then how they wished they had them back, but it was too late.

Rating: PG-13+ (almost R) No language, but violence and death. There is the scene where the women are being tortured and there is also a scene about human slavery. It is also scary. At least it had me freaked out during some scenes.

Recommendation: I’m going to have to say maybe 15 or 16 and up. My 9 year-old who has read all the “Harry Potter” books asked if he could read it and I said no. It’s not because of language, it’s just that there are some scenes that I think would be too much for that age group. I don’t want him reading about women being tortured and people being sold into slavery. I know that happened in history, but seeing it through Mr. Southwick’s descriptions made me cringe. And, I don’t want him coming into my room with nightmares of the “monsters.”

I highly recommend this book. I hope I didn’t make it seem too bad. It’s not, it’s just those couple of scenes. I loved it. I loved the tension, the scariness, the characters, the twists and turns, and the writing style.