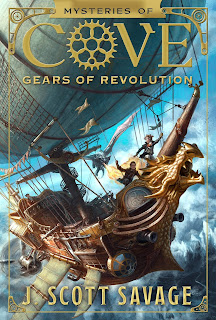 Blurb:
“After finding a compass and clues left by Kallista’s father, Leo Babbage, Trenton and Kalista head west aboard their homemade mechanical dragon to search for the missing inventor. The teenagers hope to find answers about their mountain city of Cove, but instead, they find only a blackened forest, ruined buildings, and a small underground city. Almost immediately, Trenton and Kallista are caught up in a civil war between a clan of scavengers called Whipjacks and the Order of the Beast, people who believe that dragons are immortal and divine. Stranded in a new city, the two friends meet Plucky, a Whipjack girl with mechanical legs, and Ander, a young member of the Order who claims humans are able to communicate with dragons. Can they trust anyone, or have they unknowingly stepped into a trap? And high above in the sky, the dragons are gathering…”

I enjoyed the first book in this series, Mysteries of Cove: Fires of Invention, so I was excited to read this second book. It did not disappoint! Trenton and Kallista may have been the same, there was that same feeling of searching for answers, and yes, the mechanical dragon is there too, but other than that, this book is very different from the first one. I liked that we really got to know Trenton in this book. We get to see his strengths, weaknesses, successes, and failures, and we get to see him using his creative/mechanical abilities. There are a few new characters in this book that we get to know quite well. Plucky, Ander, and Cochrane are a few of the new characters. These new characters definitely have different names! There is a lot of tension in this book because Trenton and Kallista are constantly wondering who they can trust, and they’re somewhat at odds with each other as well. There are some surprises in this book that totally threw me off, and then there were parts that were a bit predictable. I loved it when Trenton and Kallista were able to fly the mechanical dragon together. What a neat thing for them to be able to experience. Too bad there’s not a “Build a Mechanical Dragon That Flies” kit I could purchase my boys for Christmas! Overall, this book is well written. There were a few parts that I saw as a little superficial, and a couple of places that I didn’t think fit well, but other than that this book is well done. The characters are done well and the story is exciting and full of action. I didn’t love the place where they found themselves, I thought it was a bit off, but because I enjoyed the first book I’ll give it some leeway. I did enjoy the book and would recommend it, especially if you enjoyed the first book.

This book is clean, thank goodness! There isn’t any profanity and there isn’t any “intimacy” at all. There is some violence though. The people are attacked by dragons and at least one character dies.

Rating: PG (There isn’t any profanity or “intimacy.” There is a little more violence in this book, but it is not too bad. The dragons attack and at least one character dies.)

Recommendation: Third grade and up. (Great for Middle Graders and YA)