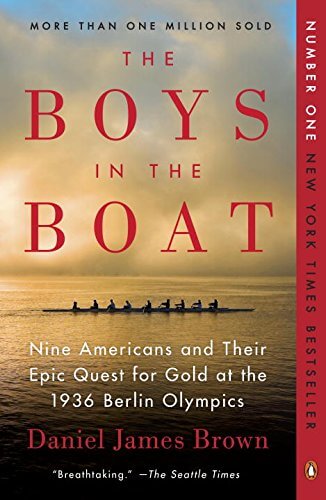 I love inspirational stories, and this one does not disappoint! Wow. The strength and determination of these men inspires me to do better, work harder, and dream bigger. If they can do the impossible, so can I! I hope you enjoy my book review of The Boys in the Boat by Daniel James Brown.

“Out of the depths of the Depression comes an irresistible story about beating the odds and finding hope in the most desperate of times–the improbable, intimate account of nine working-class boys from the American West who at the 1936 Olympics showed the world what true grit really meant. Daniel James Brown’s stirring book tells the story of the University of Washington’s 1936 eight-oar crew, a team that transformed the sport and grabbed the attention of millions of Americans.
It was an unlikely quest from the start–a team composed of the sons of loggers, shipyard workers, and farmers, who first had to master the harsh physical and psychological demands of collegiate rowing and then defeat the East Coast’s elite teams that had long dominated the sport. The emotional heart of the story lies with Joe Rantz, a teenager without family or prospects, who rows not only to regain his shattered self-regard but to find a real place for himself in the world. Plagued by personal demons, a devastating family history, and crushing poverty, Joe knows that a seat in the Washington freshman shell is his only option to remain in college.
The crew is slowly assembled by an enigmatic and determined coach and mentored by a visionary, eccentric British boat designer, but it is the boys’ commitment to one another that makes them a winning team. Finally gaining the Olympic berth they long sought, they face their biggest challenge–rowing against the German and Italian crews under Adolf Hitler’s gaze and before Leni Riefenstahl’s cameras at the “Nazi Olympics” in Berlin, 1936. Drawing on the boys’ own diaries and journals and their vivid memories of a once-in-a-lifetime shared dream, Daniel James Brown has created a portrait of an era, a celebration of a remarkable achievement, and a chronicle of one extraordinary young man’s personal quest, all in this immensely satisfying book.”

Wow! The 1936 Olympics have produced some of the best stories I have ever read! First was “Unbroken” about Louis Zampirini. He ran in the 1936 Olympics. That book was so good! Then there’s the story of Jessie Owens. I haven’t read a book about him, but I recently saw the movie “Race,” and Jessie’s story is fantastic too! And then there’s this book. Amazing. Seriously amazing. I loved it! The writing is very well done. It may be nonfiction, but it definitely reads like fiction. The descriptions are beautifully done, and the writing captivates you from the get-go.
Joe Rantz’ story is unbelievable! The circumstances he overcame in his life put him right up there with Louis Zampirini as one of the most inspirational people I’ve read about. Most people would give up and die rather than go through what he did. His so-called parents made me so angry. They are not fit to be called parents. The things they did to him were unconscionable. And yet he survived, and not only survived, but thrived. What an inspiration he is!!
The stories of the other men are also well told and captivating. I loved learning about George Pocock. He has such an interesting story. I never thought I’d enjoy learning about how to make a rowing boat, but he makes it seem so important and interesting. I enjoyed reading all the quotes by Pocock at the beginning of each chapter. This quote by Pocock really speaks to the difficulty of the sport:

“Rowing is perhaps the toughest of sports. Once the race starts, there are no time-outs, no substitutions. It calls upon the limits of human endurance. The coach must therefore impart the secrets of the special kind of endurance that comes from mind, heart, and body.”

I also enjoyed looking at the pictures in the book. I liked that they weren’t all bunched together in the middle, but they were spread here and there throughout the book. One thing I loved was how all these stories showed how trials make people stronger. Usually we just want our lives to be easy, right? Well, look at how strong these men became because their lives were not easy. I think attitudes are a little different now, and that’s unsettling. There seems to be a trend of if it’s not easy I won’t do it. We need more determination and hard work like these men had. I loved this book! I loved the writing, the characters, the story; I loved all of it. Five star ratings are unusual for me, but this one deserves it; I highly recommend this book!

Rating: PG 13+ (There is some profanity, but not a lot. There isn’t any “intimacy.” There are, however, a few situations that border on domestic violence. They are difficult to read, and not appropriate for young readers.)

Recommendation: 14 years-old and up.