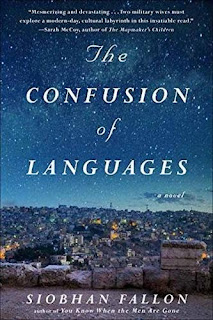 The Confusion of Languages
by
Siobhan Fallon

Blurb:
“Both Cassie Hugo and Margaret Brickshaw dutifully followed their soldiers husbands to the US embassy in Jordan, but that’s about all they have in common. After two years, Cassie’s become an expert on the rules, but newly arrived Margret sees only her chance to explore. So when a fender bender sends Margaret to the local police station, Cassie reluctantly agrees to watch Margaret’s toddler son. But as the hours pass, Cassie’s boredom and frustration turn to fear: Why isn’t Margaret answering her phone, and why is it taking so long to sort out a routine accident? With the Arab Spring rising beyond the embassy gates, Cassie begins to question not only her friend’s whereabouts but her own role in Margaret’s disappearance.”
My Review:
I haven’t been this intrigued by a book in quite awhile. Outside of the U.S., I’ve only been to Canada and Mexico, so to learn about living in Jordan was exciting; I felt like I was on an adventure. I got to travel to the Middle East while sitting on my couch; that’s why I love reading so much! I have to say that I would definitely be like Cassie. I’m a rule follower. Margaret’s personality was so different from mine that I cringed at some of the things she did, as I’m sure Cassie did. Sometimes I wish I were more like her, but I don’t think that will ever happen. This book is well written. It is split by a present day story line and a past story line. I thought the transitions were well done, and I didn’t have a hard time determining what time period I was in. How Cassie was able to find out about the back story was a little iffy, if you ask me. It definitely crossed the best friend line, but it made for a good story. I loved the descriptions of the people and places in Jordan, and I thought the characters were well developed and realistic. Would I want to move there? Nope, I’m quite content learning about it from my couch. The writing pulls you in and keeps you captive. I couldn’t put it down. Until I got to the end. I did not like the end of this book. Sadly, the ending ruined it for me. It was quite a ride though, and I had truly enjoyed it until then.
Rating: R (There is a lot of profanity, including many “f” words. There is some “intimacy” through discussion and innuendo. There is also a bit of violence.)
Recommendation: Adult (This book is not appropriate for YA or younger readers.)
Disclosure: I received a free copy of this book in exchange for my honest review.)