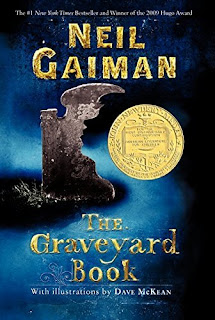 The Graveyard Book
by
Neil Gaiman

“It takes a graveyard to raise a child. Nobody Owens, known as Bod, is a normal boy. He would be completely normal if he didn’t live in a graveyard, being raised by ghosts, with a guardian who belongs to neither the world of the living nor the dead. There are adventures in the graveyard for a boy–an ancient Indigo Man, a gateway to the abandoned city of ghouls, the strange and terrible Sleer. But if Bod leaves the graveyard, he will be in danger from the man Jack–who has already killed Bod’s family.”

I had never heard of this book until my book group decided to read it this month. I really didn’t know what to expect, and you know me, I do NOT read the backs of the books or summaries about the books I read, before I read them. I like to be surprised and I like to be taken on a journey. Well, this book did both. It definitely surprised me, and I was definitely taken an an incredible journey. I was a little hesitant about reading it when a family is murdered on the first page. The descriptions of the murders and the murderer have enough detail that you know it’s awful and you know you never want to meet the man Jack, but thank goodness it doesn’t go into too many gory and gruesome details. It’s bad, don’t get me wrong, but this is a middle-grader book, so it could be worse. From a mother’s point of view, this part was horrible to read. Thinking about that baby made me sick to my stomach. And then even when he was out of immediate danger, really thinking about the logistics of what was happening still made me sick to my stomach. Luckily, the characters in this book save the day. As the reader you know that the baby is safe and that he will somehow be taken care of, and that is enough to immerse you in this world that Mr. Gaiman has created. The characters are so well developed. There is a hint of mystery to all of them, especially Silas, and it is just enough to make you wonder……Mr. and Mrs. Owens, Josiah Worthington, Caius Pompeius, Mother Slaughter, Scarlett, Mr. Pennyworth, Liza Hempstock, and Miss Lupescu each have their own places in this story, and they fit perfectly. This book is written and crafted very well. It does kind of jump from one random situation to another sometimes, but it doesn’t take away too much from the story and it’s not difficult to figure out what is going on. I really enjoyed this book. It’s so different and unique, and so well crafted, that it’s hard to put down. The graveyard becomes a well known and familiar place, and I will definitely think about graveyards differently when I pass by them now. The cemeteries around me are a little different because they aren’t too old or creepy, but I went to Boston years ago and went to a graveyard that had a couple of the Founding Fathers’ gravestones in it, and it was a little more spooky.

There isn’t any language or “intimacy” in this book, but there is a family that is murdered, and there is a murderer on the loose that wants to murder again. It is a graveyard, so there are ghouls and ancient scary guys. There are a few situations that may be scary to some readers. I love how Mr. Gaiman puts all the different elements and characters together; his use of language is very creative.

Rating: PG+ (A family is murdered and the murderer is on the loose, graveyard characters and situations that could be scary to some readers.)

Recommendation: 6th grade and up (I would not go younger than 11 years-old)