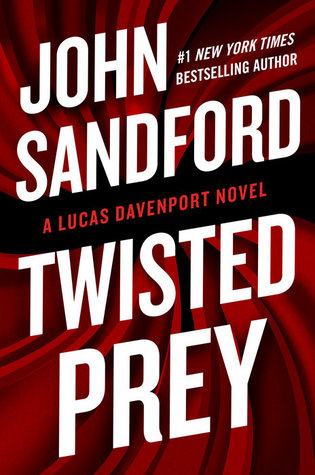 This book just showed up in my mailbox one day. Fun, right? I love surprise bookmail! This may not be my usual genre, but I like to switch things up sometimes. When I was younger I read all the John Grisham and Tom Clancy books. I thoroughly enjoyed them, and this book is the same genre. Check out my book review of Twisted Prey by John Sandford to find out if I liked it!

“Lucas Davenport confronts an old nemesis, now a U.S. senator and more powerful than ever, in the thrilling new novel from the #1 New York Times-bestselling Prey series.

Lucas Davenport has crossed paths with her before.

A rich psychopath, Taryn Grant had run successfully for the U.S. Senate, where Lucas had predicted she’d fit right in. He’d also been convinced that she was responsible for three murders, though he’d never been able to prove it. Once a psychopath has gotten that kind of rush, though, she often needs another fix, so he knew he might be seeing her again.

He’s right. A federal marshal now, with a very wide scope of investigation, he’s heard rumors that Grant has found her seat on the Senate Intelligence Committee—and the contacts she’s made from it—to be very…useful. Pinning those rumors down, however, is likely to be just as difficult as ever, and considerably more dangerous.

But they have unfinished business, he and Grant. It’s time to put an end to it, one way or another.”

Lucas Davenport must work really hard because there are a bunch of books about him. I liked him as a character. He keeps things real and doesn’t completely overreact to minor situations. Lucas thinks things through, usually, before acting. I love how much he loves his wife. If I had been his wife in this book I think I would have made him stay with me longer, but she’s probably used to it. I like that he’s a strong, capable guy, yet he also has more of a sensitive side.

There were a lot of characters in this book. I hate to admit that I couldn’t keep all of them straight. Between the different government agencies and organizations, I kept forgetting who was who. For the more important characters, though, like Lucas, Bob, and Rae, I didn’t have a problem. Overall, I thought the character development was well done. It’s a bit creepy getting into the minds of psychopaths. Yes, plural. There is more than one in this book.

The plot seemed plausible, most of the time. Just like some of the current movies, they have to throw in a few things to make the hero seem a bit more powerful than he really is. I’m fine with it. Sometimes it makes me roll my eyes and laugh a little, but it’s fine. I get it. It’s a little scary to think that someone would really do something like this in order to gain power.

There’s a lot of action in this book. Murders, car crashes, disguised assassins shooting up hotel rooms, muggings, secret plots, and hidden files are just a few. Be prepared for quite a ride! It made me very happy for my nice, quiet life. Haha! Not that four kids make for a quiet life, but that we aren’t involved in anything like this. Ever. Thank goodness!

Overall, I liked the story. I liked the complexity of it, and I liked trying to figure it all out. For me personally, there was way too much profanity. I lost track of how many “f” words there are. Maybe it was to try and develop the characters, but I think the same purpose could be achieved in a different way. I also figured out that I don’t like watching people die like that. It was quite gruesome.

Rating: R (There’s a lot of profanity, including dozens of “f” words. There isn’t any “intimacy,” but there is a lot of violence. Included are multiple murders, some of which are quite detailed and gruesome.  There is also a mugging, car crashes, and gun violence.)

My Rating: 3/5 (I lowered my rating to 3 because of all the profanity.)