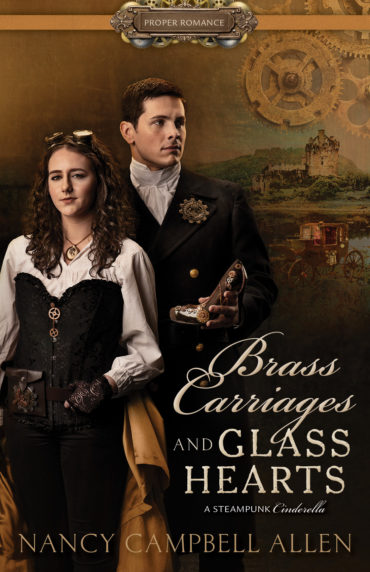 I’m loving the steampunk romances! Brass Carriages and Glass Hearts is the next installment of Nancy Campbell Allen’s steampunk fairytale re-tellings. I may have been a bit apprehensive at first, but these books have won me over in a big way! Allen has retold Rapunzel, Beauty and the Beast, Sleeping Beauty, and now Cinderella. If you do not know what steampunk is, you’re missing out! Think Victorian times with supercool tech. Oh yes! They may live during the Victorian Era, but they have floating air ships, tablets, carriages that drive themselves, transcribers (think early cell phones), and so much more. I love the creativity of the technology in these books!

“A steampunk retelling of Cinderella.

Emmeline O’Shea is determined to save the world—single-handedly, if necessary. A strong voice for societal reform, she is the natural choice to deliver a key speech at the end of the International Shifter Rights Organization’s week-long Summit in Scotland.

But when a death threat arrives at Emme’s home, she is immediately placed into protective custody, watched over by none other than her personal nemesis, Detective-Inspector Oliver Reed. The two have crossed paths many times, with disastrous results, but now they will have to work together in order to reach the Summit before midnight of the last day in order to ensure legislation is passed to protect the Shifter community.

As unseen enemies close in around Emme and Oliver, they struggle to reach Edinburgh by any means necessary, only to find Emme’s vindictive stepsister, Oliver’s vampire brother, and a dangerous political minefield awaiting them in Scotland.

Even more difficult is their own refusal to admit that the fiery animosity that once burned between them might be turning into the heat of romantic passion. Could a straitlaced policeman determined to uphold the law and an outspoken activist willing to break the rules ever find true love? Or will all their dreams shatter like glass when the clock strikes midnight?”

I read this book at a time when the news was filled with images of protests and riots in many cities across the United States of America. I must admit that I was a bit weary when this book began with the main character Emme participating in a riot and being arrested. Emme acts as the president of the London chapter of the Shifter Rights Organization, and she fights to repeal the Predatory Shifter Extermination Act. Emme is a social justice advocate for Shifters in the community.

As I stated, I read this at a difficult time in our country, and let’s just say I wasn’t too pleased to find it in my entertainment as well. However, I know Allen wrote this long before the events that transpired in real-life, and it was a crazy coincidence. Once I got over that and got into the story, I couldn’t put it down!

The characters in Allen’s stories always bring the story to life, and this book was no different. Emme is bigger than life. She may be short and petit, but her personality is a force to be reckoned with! Emme doesn’t put up with anything, especially when it comes to her nemesis, Detective-Inspector Reed. The two of them have come into contact way too often, each stubbornly doing his and her job—one to bring about a change of the law, and the other to obey the law.

I enjoyed the writing style of this book. It reads well, and I found it engaging, intriguing, and so fun! The banter (good and bad) between Emme and Oliver Reid is seriously the best. Their relationship runs the gamut from rude and mean to soft and intimate, and you never know which it will be. I loved the Cinderella theme intertwined in the storyline, and thought it was just enough to make a comparison, but not too much to be its own story.

If you want a good, solid, strong, female character, Emme is your gal. Her independence and strong will sometimes cause problems, but they have also been known to get her out of some sticky situations. If you want a handsome, intelligent, hard working gentleman, then Oliver is your man. I also liked many of the other characters in the book. Some of the characters surprised me with their actions, while others fell right where I thought they should. I definitely liked the element of surprise with a few of them!

If you haven’t tried any of the steampunk novels, then now is the time to do it! They can be read as a series, but they are also standalone novels.

Content Rating: PG+ (There’s no profanity or “intimacy” in this book, except for some brief kissing. There is some violence, though. Characters are beaten and treated roughly.)