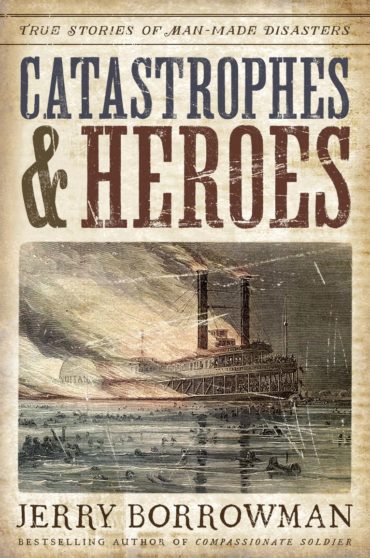 Book Review of Catastrophes and Heroes by Jerry Borrowman

I have witnessed (on tv) many man-made disasters in my lifetime. One of the first to come to my mind is the explosion of the space shuttle when I was in third grade. I watched it live with the rest of the third grade, and it was traumatic, to say the least. I can also remember hearing about or watching trains derail, airplanes crash, decks collapse, and dams fail. It’s scary every time something like this happens. Lessons are learned, amazing people are there to help, and situations become safer because of these disasters. That is what Catastrophes and Heroes by Jerry Borrowman is about. Borrowman takes the reader through eight man-made disasters, the decisions that led up to them, the heroes that helped, and the lessons that were learned.

“A century of the industrial age saw unprecedented leaps in technology and engineering, from the first flight of an airplane to the first flight of humans to the moon. But alongside these awe-inspiring achievements were horrible disasters caused by faulty engineering or careless judgment. Catastrophes and Heroes explores eight such disasters and recognizes the unheralded heroes who stepped up to save others in times of great danger–and the policies that changed as a result.

This well written book goes into great detail about each of these eight disasters. There are train derailments, dam failures, bridge collapses, boat fires, and more. It’s obvious that Borrowman has put a lot of time and effort into his research for this book. For each of the disasters he discusses the people involved, the safety standards of the time, the engineering knowledge of the time, and many of the decisions made leading up to the disaster. He then walks the reader through the disaster, the aftermath, the heroes that helped, and the safety standards that changed as a result.

I had never heard of any of these disasters. I’m even a history lover, and I did not know about any of these situations. As I read, I did find it interesting to learn about what happened in each of these experiences. I especially liked reading about the people who jumped right in to help the victims in their time of need. Another point of interest was learning about the safety changes that occurred because of these catastrophes. Often times we don’t know what needs fixing until it’s too late. Unfortunately, many people lost their lives in these tragedies, but fortunately, changes were made that made all of us safer today.

I liked this book, but it was a bit too depressing for me. Borrowman definitely focused more on the catastrophe part than the hero part, and reading somber story after somber story was a bit much for me. I could only read it a little bit at a time. That being said, I did like learning about the history of it and learning about the heroes who helped in the aftermath. I’m glad that we have record of these disasters so that we do not repeat the mistakes going forward.

Content Rating: PG-13 (There is minimal profanity; just a couple of words. There isn’t any “intimacy,” but there is quite a bit of violence as many people were killed or injured in these disasters.)

Recommendation: 16+ (I don’t think children younger would be interested in this topic anyway.)