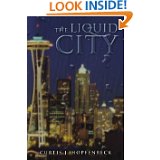 (Summary taken from the back book cover) “Shadoe Kilbourne is the consummate intellectual assassin, with an impressive arsenal of both wit and weaponry at his disposal. As Seattle’s most successful nightclub owner and restaurateur; he is also a man of great resource, humor and humanity. His lethal charms and deadly ideologies are a devastating double-edged sword; brandished at will to put the bad guys in their place and get the good girls back to his. Driven by vengeance, derived from a painful and poignant past we can only speculate on, his ties to the highest echelons and lowest corridors of humanity also make him him the perfect middleman for those who seek to solicit his fervor and favor in the hunt for his brand of justice, both inside and outside of the law.”

Mr. Hopfenbeck definitely has a very large vocabulary! This book is full of “big” words, and it is very refreshing. At first I thought maybe he was just showing off, but as the book goes on I realized that they fit the character well. I was skeptical because I thought the words might seem forced, but I got pulled into the story and enjoyed the writing a lot. The main character, Shadoe Kilbourne, is very hard to get a handle on. My feelings on him changed from page to page and sometimes from paragraph to paragraph. Do I love him because of his charity and generosity or do I hate him because of his brutality? Do I like him because he is likable and fun or do I dislike him because he is telling three women at the same time that he loves them? His trusty side-kicks are humorous, yet brutal as well, but the three of them together are hilarious. I love the banter back and forth and I really enjoyed the tennis ball bouncing scene.

The characters in this book are all different and interesting. They have good depth and are well portrayed. I enjoy Mr. Hopfenbeck’s writing style, and even though there are some cliches and a few corny references to the Utah culture, I enjoyed this book. It does have language in it along with some brutal deaths and violence. The topics discussed are serious and sobering: drugs, alcohol, human trafficking, prostitution, and gang violence are only some of them. The book does not make light of these issues at all, but does try to show the seriousness of them and shows how Mr. Kilbourne and his associates try to combat them. I would not recommend that anyone follows their lead, but I guess they get the job done. Despite the heaviness of the topic, Mr. Hopfenbeck does a good job of throwing in some humor and love as well.

Rating: R (Remember this does not follow the movie ratings, it just means that younger readers should not read it.) For the above stated reasons: drugs, alcohol, prostitution, human trafficking, gang violence, death, shootings, domestic violence.

I would recommend this book with the above cautions. I am not one for violence but I did get pulled into the story and I love it when the good guys (is that what they are?) win. I look forward to hearing more from Shadoe Kilbourne and his associates Deity, Gio, Koda, and Rama. 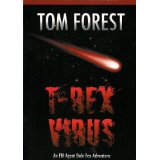 (Summary taken from the back book cover) “A small hunk of ferrous rock from an ancient asteroid which has roamed the cosmos for eons falls to earth. Discovered by a university paleontologist, a long dormant enzyme impregnated within the galactic stone is revitalized by accident in a university laboratory. A deadly virus erupts from the small boulder, taking the lives of the laboratory team within days. Members of the U.S. Army biological warfare operations staff from Fort Detrick, Maryland seize the extra-terrestrial ore. During transportation to a U.S. Government weapons research facility, the rock and its escorts disappear. Now, an off shore megalomanic pharmaceutical giant possess[es] the deadly diseased rock, and the only known antidote. Driven by greed of billions in profit, he won’t give up the cure until the virus becomes widespread. FBI agent Dale Fox hits the ground running in pursuit to recover the geode, and the medicinal remedy for the viral infection that now affects hundreds of thousands of people. Battling an elite team of killers within the pharmaceutical company, he has very little time to succeed, since he too has contracted the terminal virus!”

I didn’t know what to expect with this book. It has been awhile since I’ve read this genre, but I do enjoy a good action thriller. My boys love dinosaurs so I thought I’d give it a shot. I liked it. It was definitely action-packed. There was some language, which I expected for this genre. It’s not over-used, though, so that is good. I liked the characters, especially Dale, Sean, and Sullivan. I also liked the paleontologists. I happened to talk to a real paleontologist a couple of weeks ago and he said they had actually discovered a full T-Rex skeleton and would be displaying it by the end of the year in a new nearby museum. Consequently, it did feel kind of real when she discovered the T-Rex skeleton. It provides an interesting take on what happened to the dinosaurs millions of years ago. The writing is good: I did find a few typos, and at times it was predictable, but overall I thought it was good. There were some good twists and some humor. Mr. Forest definitely knows a lot about the subject. There is a glossary at the beginning and I needed it. A lot. I got confused with all the different acronyms and military/FBI terminology.  There are also some confusing transitions. It was full of action and would make a good screenplay for a movie. I was disappointed that I figured out the cure less than mid-way through the book, and it was a bit corny for me. Every time I read the foreshadowing I would laugh, thinking “No way, he wouldn’t really do that, right?” But he did. Even with this disappointment, I did find it very entertaining and will read more by this author. Mr. Forest brought it all together in the end and his creativity and knowledge made for a fun, action-packed adventure.

Recommendation: High School and up. There is a lot of death in this book between the virus and the fighting, and it is probably too much for children younger than high school. I think high school boys will really enjoy this book. It’s a great example of doing research for your book, and knowing a lot about the subject matter.

The Count of Monte Cristo by Alexandre Dumas
(Summary taken from the back cover) “Falsely accused of treason, the young sailor Edmond Dantes is arrested on his wedding day and imprisoned in the island fortress of the Chateau d’If. After staging a dramatic escape, he sets out to discover the fabulous treasure of Monte Cristo and catch up with his enemies. A novel of enormous tension and excitement, Monte Cristo is also a tale of obsession and revenge. Believing himself to be an ‘Angel of Providence’, Dantes pursues his vengeance to the bitter end, only then realizing that he himself is a victim of fate.”
I LOVE this book!!! I have read it (the 1,100 page version) at least twice, and I will definitely read it again! This is another of my all-time favorite books!!! I could go on and on about how much I love this book. There is an abridged version for those who do not like 1,100 page books, and I’ve heard it’s good, but I haven’t read it. Also, do not watch the movie and think you will get the whole picture. I don’t even know why they called the movie by the same name because they are completely different. The movie is good, yes….but it’s not the same story at all. I love Alexandre Dumas’s writing style. I love the description, the attention to detail, the feeling he portrays, the emotion. I love the characters (well, some of them), I love how he describes them and how everything fits together perfectly. It is a little harder of a read because it was written in the 1800’s. I love that language but some people find it hard to get into. There are also a lot of characters to remember, but it’s worth every minute of time spent reading. Okay, hopefully I don’t get your expectations too high!
Rating: PG-13: (Prison talk, revenge, but mostly you have to be a little more mature to read it just to get into the language and really understand the feelings.)
Recommendation: I read it in high school so I would say high school and up. It’s not a good read-aloud. I would recommend it to anyone 17+ who loves  a good read with love, revenge, hate, suffering, remorse, action…it has something for everyone!

Angels and Demons by Dan Brown
(Summary taken from the back book cover) “World-renowned Harvard symbologist Robert Langdon is summoned to a Swiss research facility to analyze a cryptic symbol seared into the chest of a murdered physicist. What he discovers is unimaginable: a deadly vendetta against the Catholic Church by a centuries-old underground organization–the Illuminati. Desperate to save the Vatican from a powerful time bomb, Langdon joins forces in Rome with the beautiful and mysterious scientist Vittoria Vetra. Together they embark on a frantic hunt through sealed crypts, dangerous catacombs, deserted cathedrals, and the most secretive vault on earth…the long-forgotten Illuminati lair.”
This is a fun book. There were some really gory descriptions of death, and there was more profanity than I remember in “Davinci Code,” but it is exciting and a definite page turner. I enjoyed it a lot. I like Dan Brown’s twists and turns, and I like how he incorporates real-life into his fiction. This book brings out the adventurer in all of us, and makes me want to travel to those places and maybe find an adventure of my own.
Rated: PG-13 (Gory deaths, profanity, “love scene”)
Recommended for: High school and up.