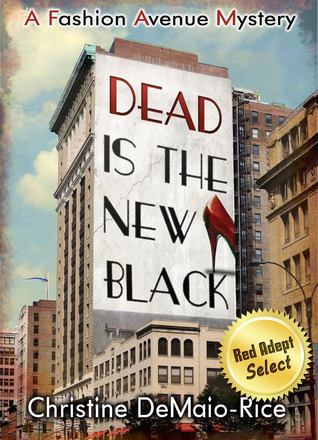 Recently I received an email from a reader asking me to review Dead is the New Black (Book #1) by Christine D. Rice. She said that her daughter had started this series and she hadn’t had time to preview it first. Of course! I’m always up for new books, and as I hadn’t ever heard of this book, I was excited to read it. It’s a mystery, which I enjoy but don’t read as often, so that got me even more excited. Unfortunately, it took me a little while to find. My local library didn’t carry it, so thankfully amazon did!

(Taken from amazon.com) “Fashion designer Jeremy St. James is everything Laura Carnegie could want in a man. He’s gorgeous, rich, and talented. The fact that everyone says he’s completely unavailable doesn’t stop her from dreaming of being in her boss’s arms. As a matter of fact, she suspects his inaccessibility is part of his charm.

When Jeremy’s backer is found dead in his office and he’s accused of the crime, he trusts Laura, and only Laura, with the keys to the design room. She wants him back and out of jail, and in the process of exposing a counterfeiting ring and finding the real killer, she uncovers the secretive man under the temperamental artist; a man who is most definitely available, and a man who might not be that inaccessible after all.

If you love Project Runway, or enjoyed The Devil Wears Prada, try Dead Is the New Black.”

Let me start out by saying that I know NOTHING about fashion. Seriously. I’m always deciding I like a trend about a year after it’s popular. I couldn’t tell you any of the famous brands or designers, and the terminology is way over my head. The same goes with sewing. I can sew a straight line (a flannel blanket or pajama pants), but patterns? They scare me!

Needless to say, I’m glad I read this on my Kindle because I had to look up the definitions of a bunch of fashion terminology. There are colors I had no idea existed, and acronyms I still don’t know the meaning of. If you are into the fashion scene or sewing then I think you’ll fit right in and enjoy that part of the story.

I found the writing style witty and smart. Laura is mostly a likable character. She drove me crazy some of the time because of her affection for her off-limits boss and her tendency to throw caution to the wind. She also didn’t have a very high self confidence. I liked the relationship she had with her sister Ruby and her mother. I definitely don’t live in a big city like Manhattan, so a lot of that style of living is new to me. It’s so fun to learn about how people live.

As far as the story line goes, it seemed plausible. Like I said, I’m not involved with the fashion scene at all, so someone who is may have a different opinion. I didn’t think the mystery was all that great. I kept waiting for Laura to prove herself as an amateur detective, and I just didn’t think she really did that. She figured it out in the end, but her sleuthing skills never shone bright.

There were a lot of characters, and I had a difficult time remembering who was who, and what job they did. I did learn a lot about how patterns are made, the steps in producing an article of clothing, and all the different skills needed.

Right from the start I figured out that the cover art does not match the style of this book. The cover art is cartoon-ish and makes it seem like a YA book. Yep, not true. It’s very deceptive, I think. Overall, this book was ok for me. If you’re into fashion, though, I think you’ll enjoy it more.

Rating: R (There’s quite a bit of profanity, including several “f” words and taking the Lord’s name in vain. Although there’s not an “intimacy” scene, it is discussed quite a bit. There is a homosexual character and that is also discussed. A murder takes place, although that part is not too graphic or descriptive. There is also some other violence with a beating.)