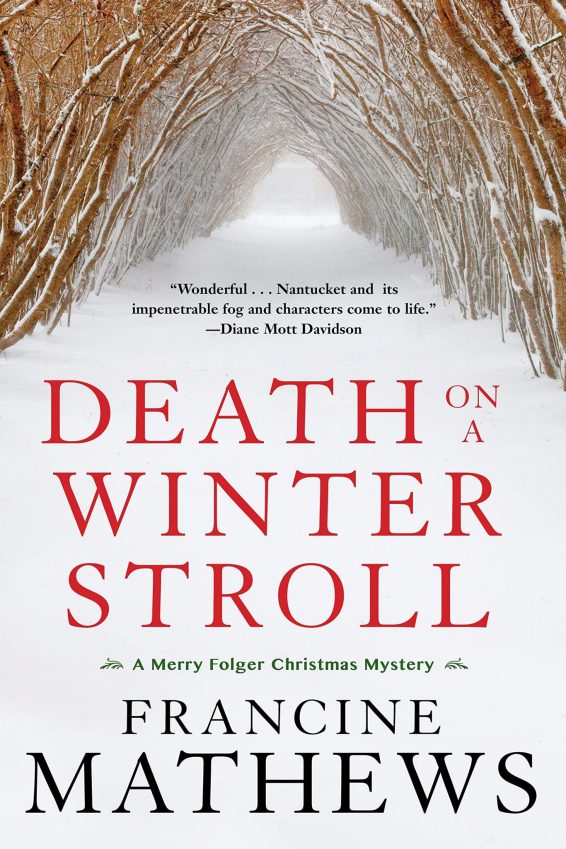 Book Review of Death on a Winter Stroll by Francine Mathews

Today is the perfect day to review Death on a Winter Stroll by Francine Mathews. Why, you ask? Well, today I took a two-hour long winter stroll on my driveway shoveling snow after last night’s storm. I have a long driveway and our snowblower decided not to work this morning, so I got to get my workout in. It’s a beautiful, winter wonderland out there!

No-nonsense Nantucket detective Merry Folger grapples with the aftermath of the COVID-19 pandemic and two murders as the island is overtaken by Hollywood stars and DC suits.

Nantucket Police Chief Meredith Folger is acutely conscious of the stress COVID-19 has placed on the community she loves. Although the island has proved a refuge for many during the pandemic, the cost to Nantucket has been high. Merry hopes that the Christmas Stroll, one of Nantucket’s favorite traditions, in which Main Street is transformed into a winter wonderland, will lift the island’s spirits. But the arrival of a large-scale TV production, and the Secretary of State and her family, complicates matters significantly.

The TV shoot is plagued with problems from within, as a shady, power-hungry producer clashes with strong-willed actors. Across Nantucket, the Secretary’s troubled stepson keeps shaking off his security detail to visit a dilapidated house near conservation land, where an intriguing recluse guards secrets of her own. With all parties overly conscious of spending too much time in the public eye and secrets swirling around both camps, it is difficult to parse what behavior is suspicious or not—until the bodies turn up.

Now, it’s up to Merry and Detective Howie Seitz to find a connection between two seemingly unconnected murders and catch the killer. But when everyone has a motive, and half of the suspects are politicians and actors, how can Merry and Howie tell fact from fiction?

This latest installment in critically acclaimed author Francine Mathews’ Merry Folger series is an immersive escape to festive Nantucket, a poignant exploration of grief as a result of parental absence, and a delicious new mystery to keep you guessing.

It has been a while since I’ve read a great murder mystery, so I was super excited to read this book. Let me tell you, it did not disappoint! I had some ideas on how it might play out, but it kept me guessing until the end. Ms. Mathews’ writing sucked me in and kept me turning pages. I enjoyed the writing style. Overall, the book flows well and even though the story is told from several perspectives, the story progresses uninterrupted.

I liked the character development in this book. Ms. Mathews did a good job making each character unique and authentic. Each character has a unique voice and has strengths and weaknesses, which allows him or her to feel more realistic. One thing I struggled with was that there were so many characters. I had a difficult time keeping track of the characters at first. By the end of the story I was good, but at the beginning of the story I had to really think about who was who.

Ms. Mathews skillfully described and detailed the setting of the story in Nantucket, Massachusetts. I felt as if I were there, walking the streets during the Winter Stroll celebration. I live in a smaller town, and I love the small-town atmosphere, especially during holidays. Independence Day is a big day in my town. I love the community feeling and how everyone comes together to celebrate. From this book I get the feeling that Nantucket, Massachusetts has the same kind of feel.

One thing I didn’t love was all the Covid-19 stuff. I know it’s real and I know it’s had a huge impact on all our lives. I have lived it. I had Covid-19 last June. I’m done with it, though. I don’t want to think about it, read about it, talk about it, or relive it in any way. Yes, it’s still affecting people’s lives. When I read a book, I want to be sucked into a different reality, a different place and time. Thankfully, it’s not overly prevalent in the story.

Overall, I thoroughly enjoyed Death on a Winter Stroll! It was the perfect winter, read by the fire, cuddled in my Minky book.

Content Rating for Death on a Winter Stroll: R (There is profanity in this book, including several “f” words. There’s no “intimacy,” but there is some violence in that two people are murdered. The murders happen off the page so they are not graphically detailed. There is also a character with an eating disorder and a scene with some inappropriate touching.)

Age Recommendation for Death on a Winter Stroll: Adult

2 thoughts on “Death on a Winter Stroll by Francine Mathews”