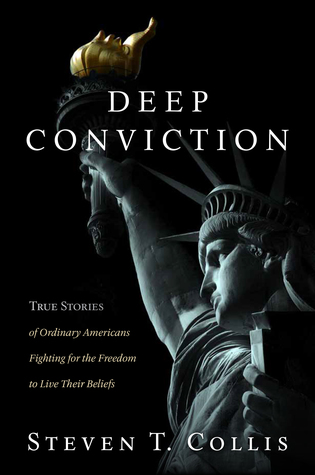 I have to admit that on a normal, daily basis, I do not usually think about the freedom of religion. I definitely take it for granted. I am a member of the Church of Jesus Christ of Latter-day Saints. I go to church on Sunday and I read scripture and pray throughout the week. I take full advantage of religious freedom, but yet I never really think about it. It’s just something that’s always been there. I am ashamed to say that I haven’t ever really thought about what it has taken to secure that freedom throughout the years. I fully acknowledge how blessed we are in the United States to be able to enjoy that freedom. There are still places around the world that do not have the same privilege, and to them I am sorry. I promise that I will no longer take this freedom for granted. Deep Conviction by Steven T. Collis brings the importance of religious freedom into the light and recognizes some of the sacrifices that have been made in order to secure that right.

“Deep Conviction features four ordinary Americans who put their reputations and livelihoods at risk as they fought to protect their first amendment right to live their personal beliefs. Though these individuals couldn’t be more different, they share a similar conviction and determination.

These stories were specifically chosen for the universality and for the broad principles they represent. Most importantly, the notion of religious freedom for all, truly cherished, allows justice and protection for everyone, religious or not.”

I was a little hesitant to read this book because I thought reading about court cases might be a little boring. Let me tell you how wrong I was. Steven T. Collis has a gift with words. He took these old court cases and brought them to life. I was enthralled! I couldn’t put it down! The law is not my thing—I teach sixth grade—but Collis held me captivated. As he described the laws and the courtroom scenes, I felt like I was there. I could feel the tension in the room, and I think I held my breath as I waited to hear the final decisions. He has a gift for storytelling.

I loved the writing style of this book. Seriously. It’s easy to read and understand, it flows well, and it draws you in. I did have to go back and reread a few paragraphs because I’m not used to reading the technical language of law, but that was my own fault. Collis’ descriptions of the people, their histories, and their lives make you feel like you have known them for years. The way he describes the courtroom scenes allows you to see a glimpse into the past, and to feel like you were there to see it happen.

When the law burdens one faith group—including atheists or agnostics—over another, it is only a matter of time before the unfavored group gains power. Once it does, it will use the law for its own ends. This results in factions vying for government power and turning it into a spear they can use to promote only their beliefs. (p. 163)

When religious liberty is truly valued, government may not punish anyone for their beliefs, no matter who happens to control the reins of power in that particular moment. (p. 165)

The importance of religious freedom cannot be downplayed or forgotten. It must be protected and fought for. Sacrifices must be made in order to keep government in check. I have never met the people in these stories, but their sacrifices and suffering have paved the way for all of us to keep our religious freedom. Whether you go to church every week or do not believe in God at all, freedom of religion protects us from one group persecuting another or forcing the other to believe something.

At first I was worried that this book would be boring or dry, but it is not. I truly could not put it down. It held me captivated for chapter after chapter. This principle is so important. I loved this book and highly recommend it!

Content Rating: PG-13+ (There isn’t any profanity or “intimacy” in this book, but there are some graphic descriptions. Mostly, I think younger readers will not understand, appreciate, or fully grasp the concept of this book.)