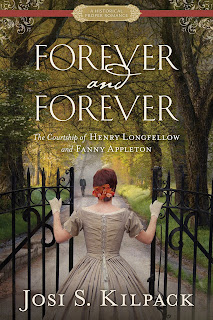 Forever and Forever:
The Courtship of Henry Longfellow and Fanny Appleton
by
Josi S. Kilpack

Blurb:
“It’s 1836, and nineteen-year-old Fanny Appleton, a privileged daughter of a wealthy, upper-class Boston industrialist, is touring Europe with her family. Like many girls of her day, she enjoys the fine clothes, food, and company of elite social circles. But unlike her peers, Fanny is also drawn to more intellectual pursuits. Published author and poet Henry Wadsworth Longfellow is also touring Europe, but under much different circumstances. Widowed while in Europe, he has stayed in order to gather credentials that he hopes will secure his professorship at Harvard College. When Henry meets Fanny, he sees in her a kindred spirit, a lover of language and literature and high ideals. He is in love. Fanny, however, is uncertain. He is ten years older than she is, and from a much  lower social class. How could such a relationship ever thrive? Could a book of Henry’s poetry, personally delivered, persuade Fanny to believe in a love that lasts forever and forever?”
My Review:
I thought this was a cute love story. Henry and Fanny are both well written, and it was fun to get to know them and their story. Fanny is quite the character. She is a strong female character; almost too strong, in fact. She is a bit stubborn and set in her ways. Henry seems like such a nice guy. He’s down to earth and up in the clouds at the same time. He is stubborn in his own way. Because each of these characters is so strong-willed, it takes most of the book to actually reach the romance part. There are bits and pieces here and there along the way, but the lead-up is definitely most of the book. This could be seen as a negative, but I actually enjoyed getting to know the characters and their stories. I liked how their paths intertwined and how they both needed the time it took. It’s funny how age and a little experience can make you look at things differently. I also loved getting sucked into the 19th century with its customs, traditions, and language. It was fun as a reader to know that these people were real, and that many of the events that took place and the people that surrounded them were also real. I thought it was a good depiction of what their lives could have been like. As a woman I’m also thankful that times have changed a bit in regard to women and their circumstances. We’ve come a long way since the 19th century, and it makes me wonder what Fanny would be like if she were living in today’s world. I also thought it was fun to have quotes from Henry Wadsworth Longfellow’s poetry intermixed throughout the story. Although it was a little slow in parts, and there were quite a few typos (the spelling of one character’s name changed throughout the book), I thought this book was sweet and fun, and I think it’s a good addition to the proper romance genre. I enjoyed it, and would recommend it.
Rating: PG (There might be a kiss or two. 🙂 There is also the death of a character, but it doesn’t go into too many details, and it’s not gory or anything.)
Recommendation: Young Adult and up (13+ years-old and up)
Disclosure: I did receive a free copy of this book in exchange for my honest review.