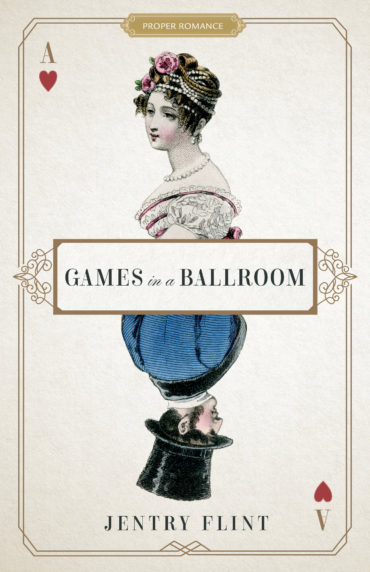 Book Review of Games in a Ballroom by Jentry Flint

Most dads I know are very protective of their baby girls (even when they’re big girls). I know my dad is still protective of me, and I’m not little anymore. When my future husband asked my dad for my hand in marriage, I was scared for him. Haha! It all turned out great. We’ve been married for 24 years now! Thankfully, my dad didn’t specify that I had to marry someone with a title because I think I’d still be waiting…In Games in a Ballroom by Jentry Flint, Olivia doesn’t have the luxury of choosing the love of her life—it’s a title her father wants.

She was forbidden to love him.
He only wanted her heart.
Can a childhood game bring them together?

Olivia Wilde has resigned herself to never finding a love match. Her father has insisted she marry a man with a title, but the men her father deems acceptable are either boring or are only interested in increasing their own diminishing coffers. With her future looking dismal, Olivia vows to enjoy the last few months of freedom with her childhood friends, including Emerson Latham. His devilish smile and flirtatious teasing stirs up feelings she knows she cannot entertain.

Emerson is struggling to rise to his responsibilities after his father’s death. Though he is still learning his place, one thing he knows for certain is that he wants Olivia Wilde to be his wife. Emerson had long ago fallen in love with her quick wit, beauty, and passionate heart. Yet, without a title, he will never be permitted to court Olivia openly. But he has a plan that may give him a chance to court her in secret.

As the Season kicks off, Emerson proposes a playful game of tag. Olivia’s friends are delighted by the idea, though Olivia is wary. After all, the game must be played in secret as they tag each other at dinners and balls. As the romance builds between Olivia and Emerson, so does the risk of being discovered. Not only are their reputations at stake, so is their safety if they are caught by Olivia’s strict father.

Can their love find a happily ever after before the game ends?

I thoroughly enjoyed this book! It’s fun and entertaining, with a little bit of cringe to add some humor. Olivia is the sweetest. She finds herself caught between her father’s wishes and the man she loves. What a difficult position to be in! Her father will only allow her to marry a man that will give her a title, but she doesn’t care about titles. Olivia wants love and happiness, and the men with titles that she has met are boring, pretentious, and apathetic.

Emerson’s father recently passed away, leaving him to be the man of the house. With that comes all sorts of new responsibilities that he does not know how to fulfill. He’s lonely and wants someone to share his life and home with. Emerson has a couple of very childish friends who ultimately help him through hard times, but also give him a hard time. Together, these men like to play games and pranks. Thus begins the game with Olivia’s heart as the prize.

I won’t give away the details, but the game is to be played out in the open without anyone else in the room catching on. Olivia knows her father would not approve but decides to play in order to have some fun before she is required to wed a boring title.

This book is well written. It’s fun and entertaining. There are some childish moments that made me cringe a bit, but it’s all good. I have never been one for pranks or immature actions so it’s a little foreign to me. The characters are well developed, come to life on the page, and make this book so enjoyable. I liked both Olivia and Emerson, but I relate more to Olivia.

This book makes a fun summer/beach read. Since fall is fast approaching (sad), it will also make a fun cuddle-up-in-a-blanket read. If you need a distraction from life, you will enjoy this book!

Content Rating: PG (It’s clean except for some kissing and a brief altercation.)