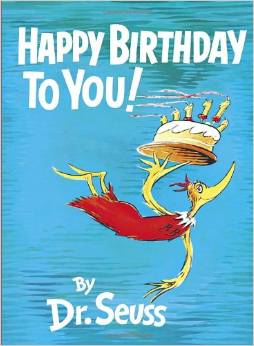 Theodor Seuss Geisel, better known as Dr. Seuss, was born on March 2, 1904. He was born in Springfield, Massachusetts to Theodore and Henrietta Geisel. His mother’s maiden name was Seuss, and it was also his middle name. While at Dartmouth College, he worked on the school’s humor magazine, called the Jack-O-Lantern, until he and his friends were caught having a drinking party, which was not allowed. Consequently, the school let him go from that position. Apparently he still wanted to write because he continued to contribute to the magazine under the name “Seuss.”

Theodor’s father wanted him to be a college professor, and so after Dartmouth he went to Oxford University in England. He became bored, though, and ended up touring Europe instead. While he was there he met Helen Palmer. They later married, and she became a children’s book author.
When he returned home from Europe, he tried many different careers. At first he tried to be a cartoonist. He did publish a few things, but that career never took off. Then he ended up working for Standard Oil for 15 years creating their advertising campaigns. Towards the beginning of WWII, he began contributing political cartoons to PM Magazine. He also worked on creating training movies. After working on the illustrations for a collection of children’s sayings for Viking Press, which didn’t do well, he wrote the book And To Think That I Saw it On Mulberry Street. 27 publishers rejected it before Vanguard Press published it.

It was his next book, The Cat in the Hat, that really began his career. The project was a joint effort between Houghton-Mifflin and Random House, and they asked him to write a story using “only 225 ‘new-reader’ vocabulary words.”(1) Lucky for us, it worked! That began his career writing children’s books using the ‘new-reader’ words.
Dr. Seuss passed away on September 24, 1991. At the time of his death he had written and illustrated 44 children’s books. Over 200 million copies of his books have been sold, and he was awarded “two Academy awards, two Emmy awards, a Peabody award and the Pulitzer Prize.”(1)


Our home library has many Dr. Seuss books in it, and they have been read many, many times! My children have loved them, and the kids I taught at school also loved them. Dr. Seuss is beloved by many, and has contributed to my love of reading as well as my kids’ love of reading. Thank you Dr. Seuss for your creativity, determination, and imagination!

Here are some great links to Dr. Seuss information and activities!!!

Doesn’t this sound like so much fun? You have the kids scan the qr code and they can
listen to the stories. Click the photo to go to the activity.

Click on the above photo to find the Dr. Seuss cut and paste bingo!

How fun to celebrate Dr. Seuss Day with a fun photo booth! Click on the image for the link.

Everyone loves cootie catchers! Click on the above photo to make yours!
Have fun celebrating today!!!
(1) http://www.catinthehat.org/
Previous
Next