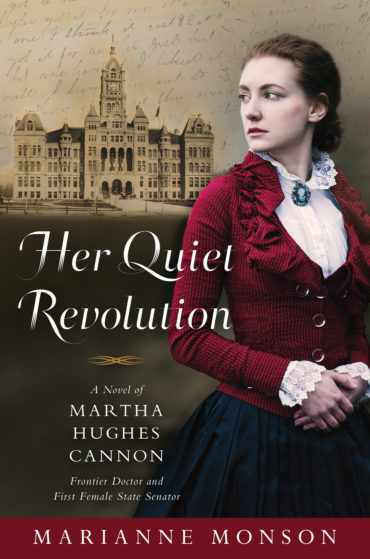 Book Review of Her Quiet Revolution by Marianne Monson

I have lived in Utah my entire life, and I had never heard of Martha Hughes Cannon until I read this book. Why? Why don’t they teach about people like her when we learn about our state’s history? It makes me wonder who else I haven’t learned about. What other people (women and men) are out there hidden in history that have made contributions to our society and we don’t even know it? Who else is out there that has done extraordinary things and has been passed over in the history books? Her Quiet Revolution is a historical fiction/biography of Martha Hughes Cannon. I’m not quite sure which genre to put it in. It’s fiction, but it’s based on Martha Hughes Cannon’s life. Marianne Monson included many relationships and events from Cannon’s life, but needed to add a little fiction when the truth wasn’t readily available.

“A novel based on the life of Martha Hughes Cannon, a pioneer woman who overcame tremendous odds.

When her baby sister and her father die on the pioneer trail to Salt Lake City, Mattie is determined to become a healer. But her chosen road isn’t an easy one as she faces roadblocks common to Victorian women. Fighting gender bias, geographic location, and mountains of self-doubt, Mattie pushed herself to become more than the world would have her be, only to have everything she’s accomplished called into question when she meets the love of her life: Angus Cannon, a prominent Mormon leader and polygamist.

From the American Frontier to European coasts, Martha’s path takes her on a life journey that is almost stranger than fiction as she learns to navigate a world run by men. But heartache isn’t far behind, and she learns that knowing who you are and being willing to stand up for what you believe in is what truly defines a person.

Her Quiet Revolution is the story of one woman’s determination to change her world, and the path she forged for others to follow.”

As I read this book I couldn’t help but notice how much I take for granted as a woman living in the United States of America today. Yesterday was the primary election in my state, and I had the privilege of voting for the candidate I think should be the president of the United States of America. I graduated from college with a degree in elementary education, and no one questioned my skills or abilities. 29 sixth graders now call me their teacher. Thankfully, I don’t have to wear a dress to work every day. With my husband I own a home and a car. I get to drive wherever I want to, and whenever I want to—without a chaperone. I have rights, freedoms, and liberty.

Many women that have gone before me have not had these privileges, and many still do not have them today. I’m thankful to people like John Hancock, John Adams, Harriet Tubman, Elizabeth Cady Stanton, Susan B. Anthony, Martin Luther King, Jr., Rosa Parks, and Martha Hughes Cannon (I could name 100 more…) who have had the courage to see a different, better, and more equal path ahead.

I really enjoyed this book. I loved learning about Martha Hughes Cannon’s life. There’s also some history of the state of Utah, and of the Church of Jesus Christ of Latter-day Saints, of which I am a member. Some of the history I knew previously, and some I did not. Ms. Monson did a great job of bringing the three pieces together into a story that seamlessly wove together.

Martha (Mattie) was an amazing woman. She serves as an example to everyone, especially women. At a time when women going to college were frowned upon, she didn’t care. She went anyway. Mattie endured a lot to get her medical degree. I loved how she also went on to improve her oratory skills as well. I am not going to go into her whole life here; for that you need to read the book. Suffice it to say that she accomplished many things and endured some rough trials in her lifetime. Martha Hughes Cannon paved the way for women in the United States of America to go to college, become doctors, vote, and serve as public servants.

The book is very well written. The writing style draws you into Mattie’s life, feelings, emotions, dreams, passions, and pain. The characters are well developed, realistic, and become your friends along the way. It’s obvious that Ms. Monson spent a lot of time researching this book. Her hard work pays off, for sure. I learned so much, but I also came away with questions of my own that I’d like to do more research on. There were some practices (like polygamy) that were stopped completely long ago, and others (like women healing the sick) that have somehow been forgotten along the way. I’d like to look more into the latter.

Whether or not you are from Utah, and whether or not you are a member of the Church of Jesus Christ of Latter-day Saints, you will enjoy learning about Martha Hughes Cannon. She may have been from Utah, but her legacy pertains to all women. The way she stood up to her trials and plowed right over them inspires me to be and do better. At a time when women did not go to college, she did. When women were not doctors, she was.

Mattie worked hard and stood up to disappointment, taunts and jeers, and unbelievers. Society really has come a long way in accepting that women are capable of being doctors, senators, scientists, and more—thank goodness! It may not be perfect yet, but we’ve come a long way. I’m thankful to those who sacrificed to bring us this far.

I think the title perfectly describes this book, and the cover art is beautiful and inviting. I really enjoyed this book. It’s an inspiring story of a woman who worked hard and followed her dreams. Martha Hughes Cannon definitely led a quiet revolution that overturned the erroneous stereotypes and misgivings of many people. Her quiet contribution helped pave the way for women everywhere to achieve their dreams.

Content Rating: PG-13 (There isn’t any profanity, violence, or “intimacy.” Some of the themes are geared toward older readers and would be a bit too much for younger readers.)

2 thoughts on “Her Quiet Revolution by Marianne Monson”