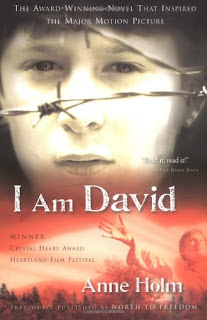 I Am David by Anne Holm

Blurb:
“David’s entire twelve-year life has been spent in a grisly concentration camp in Eastern Europe. He knows nothing of the outside world. But when he is given the chance to escape, he seizes it. Sensing his enemies hot on his heels, David struggles to cope in this strange new world, where his only resources are a compass, a few crumbs of bread, his two aching feet, and some vague advice to seek refuge in Denmark. Is that enough to survive?”

I cannot even imagine being David in this scenario. Wow. What a brave kid. What a great example of determination, courage, and heart. At first I thought he was in an actual WWII concentration camp, which didn’t make sense in the context of the story (Why were the people of Italy so happy and unconcerned?). At my book group I learned that it was a post war camp. I was told it was a Stalin work camp, but I searched all over today and could never find that actual detail. Just know that it is post WWII, and it will make a lot more sense. Although the writing is simplistic, and it would be all-but impossible for his journey to take place, this book portrays so much emotion and teaches many lessons. I loved watching David as he experienced new things. Imagine not knowing what an orange is! Seeing common, everyday objects through his eyes was so fun.On his journey David comes across the worst and best of people, and the contrast is huge. The lesson of being kind and compassionate to others is one that permeates the story. This book is not a religious book, but David prays to “God of the green pastures and still waters.” I found that very interesting; even in his darkest times he had faith in a power greater than himself. As I said previously, the writing was simplistic, but it was full of emotion. David’s emotion is real and jumps off the page. You could feel his fear, his curiosity, his courage, his hunger, and his pride in his accomplishments.  I love how he always tried to do the right thing, even if he didn’t really know what that was sometimes. It wasn’t only a physical journey, but also a journey to find himself and to learn about the world outside the camp. I think this is a great upper elementary/YA read. There are many lessons to be learned, and it is always good for kids and YA to get out of their little bubbles and see the world through someone else’s eyes. I enjoyed this book a lot and would definitely recommend it.

This book is clean! There isn’t any profanity or “intimacy.” There is some minor violence when a character is burned in a fire, and there is some brief fighting. There are also some people in the book that do not treat David kindly.

Rating: PG (No profanity or “intimacy,” but some minor violence-a girl is burned in a fire, brief bullying, and people who treat David unkindly.)

Recommendation: 5th or 6th grade and up (A knowledge of post WWII and a map of Europe would be very helpful.)