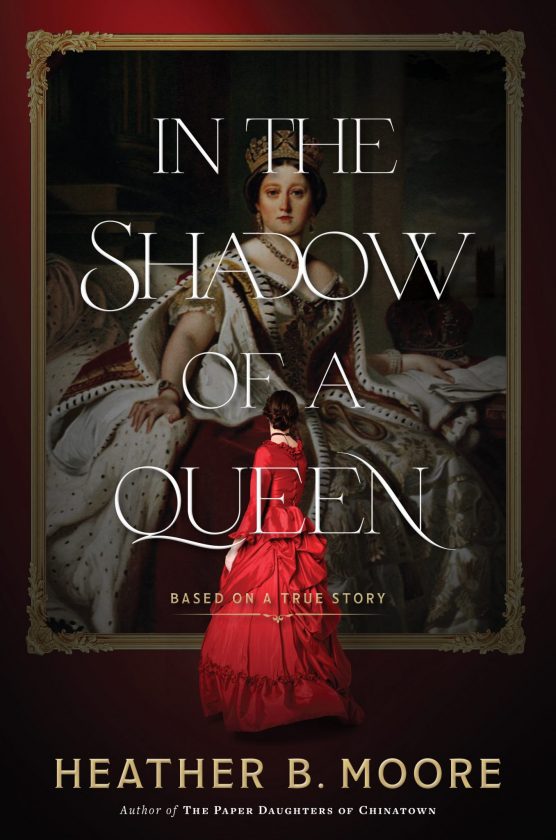 Book Review of In the Shadow of a Queen by Heather B. Moore

My knowledge of today’s British royalty is very limited; my knowledge of historical British royalty was nonexistent until I read this book. I know the queen recently passed away. I know of Kate and William and that they have cute kids. I’ve heard a few things about Harry and Meghan. Royalty really isn’t my focus, but I do remember watching Princess Diana’s wedding when I was a child. I had no idea who Princess Louise even was because I’d never heard of her. In the Shadow of a Queen by Heather B. Moore changed that, though! I can now say I know who Princess Louise is!

Based on the true story of the free-spirited daughter of Queen Victoria.

Princess Louise’s life is upended after her father’s untimely death. Captive to the queen’s overwhelming mourning, Louise is forbidden to leave her mother’s tight circle of control and is eventually relegated to the position of personal secretary to her mother—the same position each of her sisters held until they were married.

Already an accomplished painter, Louise risks the queen’s wrath by exploring the art of sculpting, an activity viewed as unbefitting a woman. When Louise involves herself in the day’s political matters, including championing the career of a female doctor and communicating with suffragettes, the queen lays down the law to stop her and devotes her full energy to finding an acceptable match for her defiant daughter.

Louise is considered the most beautiful and talented daughter of Queen Victoria, but finding a match for the princess is no easy feat. Protocols are broken, and Louise exerts her own will as she tries to find an open-minded husband who will support her free spirit.

In the Shadow of a Queen is the story of a battle of wills between two women: a daughter determined to forge her own life beyond the shadow of her mother, and a queen resolved to keep the Crown’s reputation unsullied no matter the cost.

Knowing nothing about British royalty, I didn’t know what to expect from this book. I usually enjoy historical fiction, though, so I was interested in learning more about Princess Louise. I have read several of Heather B. Moore’s historical fiction books and have enjoyed them. She usually has a great writing style that sucks you right into the story. This book, however, took me awhile to get into. Much of the story is told through dialogue, and there are a lot of characters to remember. Between these two things, I found it more difficult to get into the story. Every time I came to a character, I’d need to stop and think about who that character was and how he/she fit into the story.

Once I figured out who everyone was and how he/she fit into the story, it was a much easier read. The dialogue also became easier to read as the story progressed. Over time I also came to like Princess Louise and began to care about her and her story. I felt Princess Louise was easy to relate to and care about. Some of her siblings did not come across this way, however. I’m very glad I don’t need to worry about country relations falling apart depending on who my daughters marry.

It took me quite a while to get into the dialogue writing style, but once I did, I thought it was ok. It’s not my favorite writing style, though. The character development through the dialogue ended up being ok also. You could get a good sense of who the person really was by how that person spoke to and treated those around him or her.

Overall, I ended up enjoying In the Shadow of a Queen. I learned a lot about Princess Louise and her family, and about British royalty in general. One thing I learned was that I am glad I’m not royalty. Sure, living in a castle would be epic, but having the freedom to live as you please (and under the radar) is, in my opinion, much better. Maybe I’ll need to pay more attention to King Charles III and his family now that I know a bit of their history. I must also add that I love the cover art! It is a beautiful cover and fits the book perfectly.

Content Rating: PG+ (There isn’t any profanity, “intimacy,” or violence in this book. However, a few of the main characters die.”