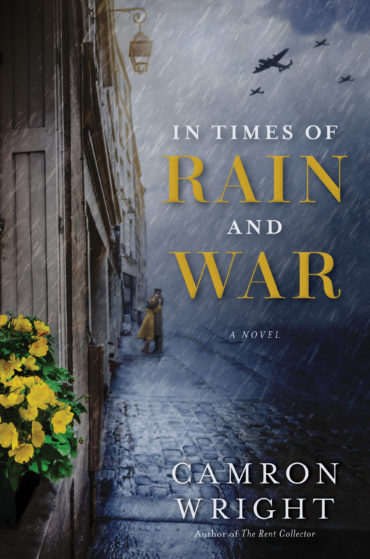 If you have followed me for any amount of time, you will know how much I love reading World War II books. I have read World War II books from many angles: Jews in hiding; Jews in concentration camps; people hiding Jews in their homes; people running and hiding; POWs; people who go out of their way to help rescue and hide Jews, and many more. In Times of Rain and War by Camron Wright is a wonderful addition to my WWII book repertoire. I haven’t read a story or really even ever thought about the bomb diffusers in England. I loved learning this new angle.

“In September of 1940, during the Blitz in London, Audrey Stocking is blending in with other civilians who are trying to survive the nightly bombings, but she has a secret. She’s not British; she’s German. Her fake passport and nearly perfect English allow her to blend in as she works hard to help evacuate British children into the countryside. Audrey longs to reunite with her family in Germany, but her double life, the bombings, and the watchful British Military Intelligence have forced her to stay put. And then there are the paralyzing nightmares . . .

Lieutenant Wesley Bowers, an American soldier training with London’s Bomb Disposal Company 5, meets Audrey when an air raid leaves an unexploded bomb on the floor of her flat. She is attractive, intelligent, and compassionate, and there’s an immediate connection between them. As they get to know each other, Wesley realizes Audrey is the one bright spot amid the war’s unending bleakness and constant threat of death. But will he still feel the same if he discovers the secrets she is hiding? Secrets even Audrey is unaware of?

In Times of Rain and War is a gripping and heartbreakingly beautiful story about the strength and resilience of the human heart and spirit, reminding us there is always hope in hard times.”

I have heard and read of the Nazi’s bombing of England. Why then, have I never heard of the bomb diffusers? There were many groups of soldiers who would go to bombing sites and diffuse bombs that hadn’t exploded. As you can imagine, the job proved to be very dangerous, and the average bomb diffuser lived ten weeks on the job. Scary! Lieutenant Wesley Bowers was an American soldier who was asked to go to England to help the bomb diffusers. He had NO idea what he was getting into. He quickly learned.

Audrey Stocking had a secret. She lived in England, but she was a Jew from Germany. She had come over with her aunt Claire before things got too bad in Germany. Her father had sent her away to protect her. No one knew their secret. Audrey and Claire worked to evacuate British children out of the city to live with families in rural areas. They hoped this would protect the children during the bombings. (If you’d like to read a good book about this, The War That Saved My Life is a great example.)

The first unexploded bomb that Lieutenant Bowers investigated happened to land in Audrey’s flat. She desperately wanted a few things out of her flat, and he managed to save them. With that experience, they immediately make a connection and begin to see more of each other. Each one helps the other through some tough times, and they become close. However, Lieutenant Bowers does not know Audrey’s secret. Will it change their relationship if he finds out?

I truly loved the relationship between Lieutenant Bowers and Audrey. Audrey’s father had taught her the importance of letter writing, and Audrey taught Lieutenant Bowers how to improve his letters to his girlfriend at home. That scene was such a sweet and tender moment. Although each has his or her flaws, they look past those and see the good in one another. Each character is well written and developed well. I also loved the supporting characters of Aunt Claire and Lieutenant Bowers’ Company. Some of the guys in his company hold a special place in my heart.

I love the writing in this book. The writing style pulls you in and wraps you in the story. You feel as if your breath may just cause the bomb to explode. So you hold it. Then you let it out when you know it’s safe to do so. You feel as if your wrong look may alert the officials of Audrey’s status. Yes, you become fully engulfed in this story. I thoroughly enjoyed it!

Rating: PG-13 (There isn’t any profanity or “intimacy” in this book. However, there are some violent scenes–it’s war–and several characters die. It’s war, so there are heavy topics and themes.)