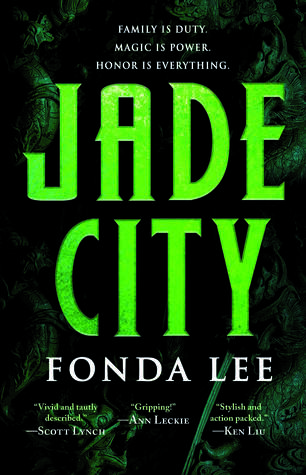 On Twitter a few weeks ago, I read a tweet by someone who said that Jade City was a life changing book. Wow! How could I not add it to my TBR pile? I want to read it if it’s life changing! So I pushed aside a few books that I should have been reading, and picked this up. I liked it, but was it life changing? Read my book review of Jade City  by Fonda Lee to find out.

“Jade is the lifeblood of the island of Kekon. It has been mined, traded, stolen, and killed for—and for centuries, honorable Green Bone warriors like the Kaul family have used it to enhance their magical abilities and defend the island from foreign invasion.

Now the war is over and a new generation of Kauls vies for control of Kekon’s bustling capital city. They care about nothing but protecting their own, cornering the jade market, and defending the districts under their protection. Ancient tradition has little place in this rapidly changing nation.

When a powerful new drug emerges that lets anyone—even foreigners—wield jade, the simmering tension between the Kauls and rival Ayt family erupts into open violence. The outcome of this clan war will determine the fate of all Green Bones—from their grandest patriarch to the lowliest motorcycle runner on the streets—and of Kekon itself.”

As I stated above, someone on Twitter posted that they thought this book was life changing. That’s quite a statement. To me, Les Miserables by Victor Hugo was life changing, and I find that hard to beat. But I thought I’d like to read it to see for myself. It starts off right in the action. A couple of boys decide they want to steal some jade off of a man in a restaurant. Right from the beginning you know how valuable jade is.

As the story goes on, you get to meet the main characters. Lan and Hilo Kaul, although brothers, are very different. Lan is the leader of the clan, and Hilo is the one who keeps the peace—pretty much by showing a strong arm of violence. There are a lot of characters, and it took me awhile to figure them all out. The names are not difficult, but different, and it would take me a minute to place some of them.

Lan and Hilo have a sister. Her name is Shae. She has chosen a different path than they have, and has chosen not to wear jade or be a part of clan leadership. There are other characters, but these are the most important characters. I thought the author developed the characters very well. They each had individual personalities, strengths, weaknesses, and flaws. You could tell they were family, yet they were their own selves. I liked that they each had their own voice.

The story felt a bit confusing at times, but overall it flowed well, was exciting, and very unique. I haven’t read a book with a similar story line, and I always like that. It does take a minute to figure out the workings of the clan and the layers of leadership, but once you figure it out you’re good to go. Although there was a lot of fighting, there was also strategy and smarts behind the clan’s actions.

Part of the story reminded me of a line in The Incredibles. It’s when Syndrome has Mr. Incredible cornered, and he says, “I’ll sell my inventions so that everyone can be superheroes. ‘Everyone’ can be super! And when everyone’s super…’no one’ will be.” That same philosophy comes into play in this book—only with jade. If everyone can safely wear jade, then what will happen to the clans? Will they be needed or important? Will they still hold the power they now do? I found that aspect to be quite interesting and thought-provoking.

Did I find this book life changing? No, I didn’t. I did enjoy it though. I liked the characters a lot, especially Shae. Hilo was a bit too intense for me, but I also liked Lan a lot. Anden was also an interesting character. I felt bad for him, but I also didn’t. It was weird. He’s in a difficult place, but at the same time, he has a hard time accepting who he really is instead of where he’s come from. That whole thing was also quite thought-provoking.

Rating: R (Profanity, including many “f” words. “Intimacy,” including scenes, innuendos, and prostitution. Violence including war atrocities, murder, bombings, fighting, and the death of several characters.)

My Rating: 3.5/5 (I lowered my rating from 4 because of all the profanity and graphic “intimacy” scenes.)