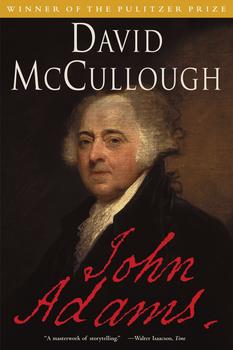 Learning about the American Revolution and American history is one of my most favorite things to do. The Founding Fathers amaze me with their amazing insight into human nature and the role of government in a free society. Were they perfect? No. Absolutely not. Did they have their flaws? Yes. Yes, they did. Just as we all have biases and opinions, so did they. I have had this book sitting on my shelf, waiting to be read, for years! I’m so glad I can finally say that I’ve read John Adams by David McCullough.

The Pulitzer Prize–winning, bestselling biography of America’s founding father and second president that was the basis for the acclaimed HBO series, brilliantly told by master historian David McCullough.

In this powerful, epic biography, David McCullough unfolds the adventurous life journey of John Adams, the brilliant, fiercely independent, often irascible, always honest Yankee patriot who spared nothing in his zeal for the American Revolution; who rose to become the second president of the United States and saved the country from blundering into an unnecessary war; who was learned beyond all but a few and regarded by some as “out of his senses”; and whose marriage to the wise and valiant Abigail Adams is one of the moving love stories in American history.

This is history on a grand scale—a book about politics and war and social issues, but also about human nature, love, religious faith, virtue, ambition, friendship, and betrayal, and the far-reaching consequences of noble ideas. Above all, John Adams is an enthralling, often surprising story of one of the most important and fascinating Americans who ever lived.  (Taken from the Simon & Schuster website.)

When I finally decided to do it, and I took this book off my shelf, I found the receipt inside the front cover. When was it dated? Oh, my birthday in 2009. Yes, 2009! It has been sitting there, begging me to read it, for 13 years. Every time I saw it on the shelf, I’d feel guilty for leaving it there so long. I think it’s the book that has been in my TBR pile for the longest! Well, as you can see, there was a lot of anticipation and build-up in my mind regarding this book. Thankfully, it did not disappoint!

John Adams has always fascinated me. I remember learning about him in history classes over the years, and I remember reading the letters that he and his wife Abigail wrote to each other. When I saw this book, I wanted to read it because I wanted to know more about John Adams, his life, his role in the Revolution, his presidency, and what he did after he left office.

Although this book has over 600 very detailed pages, it read faster than I thought it would. I finished the book in about a month and a half, reading about ten pages a day. David McCullough is one of my all-time favorite authors. He has a way of taking a complex story and bringing it to life. His nonfiction reads as fiction. This book is no different. John Adams became a beloved friend as I read this book. Did I agree with everything he did or said? Ummm, no. In fact, there were a few instances in which he lost my respect. There were also a few times in which he gained a new-found respect.

I learned so much about John Adams in this book. As a history lover, I thought I had a pretty good grasp on who the Founding Fathers were. Yeah, when reading this book, I figured out my knowledge barely scratched the surface. That’s why we read, right? David McCullough’s understanding and knowledge of John Adam’s life is outstanding. You can tell that he put a lot of time into research and reading.

Although there are complexities in the story, David McCullough’s writing and writing style take those complexities and break them down so they are understandable. The story flows well and truly is easy to comprehend. I’m not a politician, lawyer, or a founding member of a new country, but I was able to understand most of the treaties, deals, and policies John Adams helped to implement. This book helped me to better understand how the strong government, states’ rights issues played into the founding of the country, which helps me to better understand how those roles still play a part today.

One thing I found comforting was that there were great divisions and differences between viewpoints way back at the beginning of the country. I tend to think that things are bad now, and they for sure have never been this bad before. I laughed out loud and read my husband many paragraphs because I swear you could read the exact same things today as you could read back then. It was a…” Was this said in1800 or 2022?” moment that made me feel much better about the divisiveness today.

How did I not know that John Adams lived in France or Holland? How did I not know that he defended the British soldiers after the Boston Massacre? I learned so much about him and his life. Although not perfect, we need more people like John Adams to serve in our government today. He served because he knew the country needed him and his skills. I think he liked the notoriety and the fame, but he also loved his quiet farm, his books, and his family. John Adams served with his whole heart because he loved this new country and wanted it to succeed. I am so thankful for him and the other Founding Fathers for sacrificing their lives to make this country free. Is it perfect? No, but because of great people like John Adams, we have set a high bar for us to work toward.

I absolutely loved this book and am so glad I finally took the time to read it! David McCullough is a master storyteller, and the world lost a treasure when he passed this past year. Any history/American history lover will enjoy the 650 pages and the knowledge you gain from reading it.

Content Rating: PG-13 (There isn’t any profanity unless it is quoted from a historic figure. There is talk of “intimacy” and issues surrounding it, and it is the Revolutionary War so there is some violence discussed.)