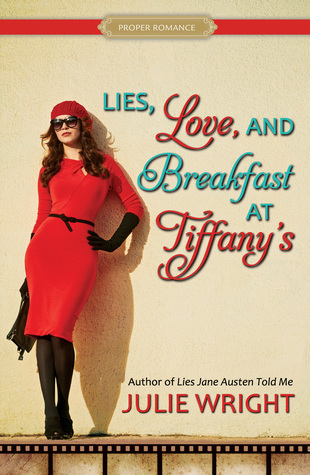 Book Review of Lies, Love, and Breakfast at Tiffany's by Julie Wright

I loved Julie Wright’s previous book Lies Jane Austen Told Me, so I was pretty excited to read this book. The only problem was that I am a huge Jane Austen fan, so the previous book fit me perfectly. I truly (gasp!) don’t know anything about Audrey Hepburn. I have not seen any of her movies, so going into it I hoped I could feel a connection with this book anyway. I needn’t have worried–Ms. Wright has a fun writing style that draws you into the story and makes you feel right at home. The only problem now? Now I really want to watch an Audrey Hepburn movie so I know what everyone is talking about! Anyone want to do an Audrey Hepburn marathon with me?

Women in Hollywood are just pretty faces. But Silvia Bradshaw knows that’s a lie, and she’s ready to be treated as an equal and prove her worth as one of Hollywood’s newest film editors.

She and Ben Mason had worked together as editors before Silvia got her big break, so he’s the perfect person to ask for feedback on her first major film. But even as their friendship begins to blossom into something more, a lawsuit surfaces, jeopardizing both Ben and Silvia’s jobs—as well as their fledgling romance. Audrey Hepburn one said: ‘The most important thing is to enjoy your life—to be happy—it’s all that matters.’ Silvia agrees. Or she used to. It’s one thing to risk her job and her heart, but can she really risk Ben’s too? Does she have the right to make decisions for her own happiness when they affect so many other people?

With everything to lose, Silvia meets Ben for breakfast at his favorite diner, Tiffany’s, for one last conversation before the credits roll on true love.”

First off, I love the cover of this book! I love the classic red dress with the gloves and hat—so fun! It’s very Audrey Hepburn-ish. I think. Haha! I had to Google “Audrey Hepburn” because I had no idea. Here’s a pic from IMDB.com:

She is beautiful! Here are a few of the movies she’s known for, and that are mentioned in the book:

Silvia is a film editor at a major production company. It turns out that it’s quite the accomplishment for a woman because there aren’t many women film editors out there. She routinely recognizes that she is the only woman in the room. Many of those good ol’ boys still have an antiquated view of women, and it isn’t a good one. They aren’t very accepting of women in their space. She holds her own, though! She works hard and does a very good job. In fact, she does such a good job that she may even be recognized for her work.

Then, one fateful night, a drunk boss and a looming deadline collide. What is she going to do? How will she get the finishing touches on the film ready for the next day’s meeting? I’m not telling. Nope, you’ll need to read it. I don’t want to give anything away. Just suffice it to say that what happens next changes the course of her life. No biggie.

Silvia is such a fun character. She is relatable, personable, real, and likable. She’s a strong female character, which I love. Silvia is not perfect, by any means, and that’s one of the things that makes her such a great character. She can be a little clueless when it comes to recognizing how others feel about her, but she eventually catches on. I love her voice in the book. I don’t know anything about editing movies, but all of that seemed legitimate to me. It was fun watching her growth over the course of the book.

I loved many of the other characters as well. Silvia’s grandma is a darling lady, and I loved her spunkiness. I liked Emma’s character because she reminds me of my bestie. She’d do anything for Silvia, but she also tells her like it is. Walt seems like a genuine gentleman, and I thought it was great when he came into the picture. Ben is well developed, and seems like such a great guy—for most of the book. There were a few times that I wanted to scream at him, but he’s a guy. They’re a little clueless sometimes.

When I had about 45 pages left, I seriously doubted that everything could be figured out by the end of the book. “Ahhhhh!!!! What.Just.Happened? No. What?” Those were just a few of my thoughts. Yep, there’s quite the revelation, and it threw me for a loop, for sure! I didn’t want to believe it, but there it was. Keep reading. That’s my advice. I won’t say anything more…don’t throw the book out the window. Keep reading.

There were a couple of things I noticed that were missed by the editors–they didn’t quite fit, but I have an ARE (Advanced Reader’s Edition), so they should hopefully be fixed in the for sale copy.

I liked this book a lot! I stayed up too late last night finishing it, but I couldn’t put it down. The characters are well done, relatable, and realistic, and the writing style just draws you in. It’s a fast, entertaining, weekend read. Even though I don’t know anything about Audrey Hepburn, I still enjoyed it.

Rating: PG+ (There isn’t any profanity or violence. There’s not any “intimacy” except for some kissing. There is scene with a drunk boss.)

Recommendation: YA and up