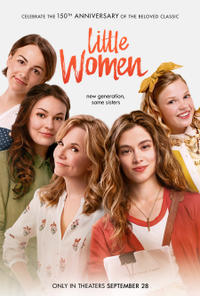 My Review of the Little Women Movie

I have read Little Women by Louisa May Alcott many times. It’s one of those books that I keep going back to over and over. I love the characters and the relationships in the story. Although it’s a sad story, I never leave the book feeling depressed or distraught. The overarching theme is inspiring and uplifting. Family and friendships are important. Everyone is different and has her own goals and dreams. We all make mistakes, but that is how we grow and learn. Is is possible for a movie to capture those feelings without becoming too cheesy? Could an adaptation ever do the book justice? Find out in my review of the Little Women movie.

Fans of Louisa May Alcott’s timeless classic, Little Women, will love the modern retelling of the timeless family story.
LITTLE WOMEN is a celebration of the female voice and the bond of sisterhood. Opens nationwide on September 28th

As I previously stated, Little Women is one of my all-time favorite books. I’ve read it many times throughout my life; I read it a few times in my youth, and I’ve read it every few years since. It never gets old. I love the writing, the characters, the story, and i love the feelings and relationships portrayed in the book. Wow! I had high expectations for this movie!

I was so excited to be invited to the premiere event! I’ve never been to anything like that, but it was very fun. I went with my mom, and we ended up having great seats. We sat behind all the older sister actresses (there were also darling actresses that played the sisters when they were younger).  After the movie was over, some of the cast and crew did a question and answer session, and I enjoyed that as well. It was fun to hear about their experiences.

So did the movie live up to my expectations? I have to admit that I was skeptical when I found out that it was an adaptation, but I think it turned out to be a good thing. If you try and recreate the original, you’re going to have a hard time meeting expectations, but if you go with an adaptation, it’s different. As a reader (or viewer), you know it’s going to be a little different, so you’re not expecting the original, if that makes sense. I thought they did an excellent job of bringing the story into the 21st century and yet staying true to the story.

The script was well written and did stay true to the original story. I thought the actresses and actors were well chosen and did a great job. A friend told me that she thought Jo was over-acted and cheesy, but I disagree. In my mind, Jo is a dramatic person. It is all about her, and she isn’t afraid to let everyone know that. Jo kind of over-acts her own life, I think, and so I thought the actress did a good job of capturing her essence. I thought the other characters also did a good job portraying the sisters and family members. Each one showed the qualities and characteristics that I have come to love in each of the sisters.

The sets and scenery were beautiful! My favorite place was the attic room that the sisters shared. I want that attic in my house! It is amazing. It’s almost exactly how I pictured it. And the girls’ castles were darling.

I was a bit skeptical at the beginning of the movie, but by the end it had turned into just a cute film. It is a little cheesy, but so is the book. I mean, it’s all about their lives and their dreams. The girls love to act out plays in the attic, they have their Pickwick club where they tell their grievances, and anything like that nowadays will seem a bit cheesy on film. This movie is way better than a Hallmark film. I really liked it. I loved the emotion and the feelings because they do feel just like the book does. It’s most likely a girls night out movie; my husband probably wouldn’t want to go see it. I’d say go see it, though! It’s a cute show, and if you like the book then you’ll enjoy the movie!

(I did think this was a good rating. There isn’t any profanity, but there is a scene where two teenagers are kissing, and the boy wants to take it farther than the girl does. She starts to feel uncomfortable and asks him to stop. He does stop and then walks away. There is also the death of a main character.)

Age Recommendation: YA (13) and up

(I almost took my 13 year-old daughter with me. If she had been there, we would have had a good conversation after about saying no and meaning it. It would have made me a little uncomfortable to have her see it, but it didn’t go farther than her saying no, so that was good.)

2 thoughts on “My Review of Little Women Movie”