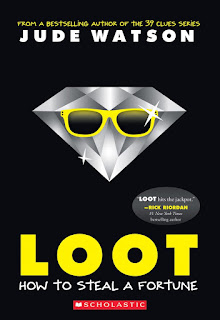 Loot (Book #1)
by
Jude Watson
Blurb:
“On a foggy night in Amsterdam, a man falls from a rooftop to the wet pavement below. It’s Alfie McQuin, the notorious cat burglar, and he’s dying. As sirens wail in the distance, Alfie manages to get out two last words to his young son, March: “Find jewels.” But March learns that his father is not talking about a stash of loot. He’s talking about Jules, the twin sister March never knew he had. No sooner than the two find each other, they’re picked up by the police and sent to the world’s worst orphanage. It’s not prison, but it feels like it. March and Jules have no intention of staying put. They know their father’s business inside and out, and they’re tired of being pushed around. Just one good heist, and they’ll live the life of riches and freedom most kids only dream about. Watch out! There are wild kids on the loose and a crime spree coming…

I picked up this book, and book #2 Sting, at the library because my 11 year-old daughter wanted to read them. Of course, I had to read them first since my older boys hadn’t read them, and neither had I. I really didn’t know what to expect, but boy was I surprised! The writing style is easy to read, entertaining, and flows well. It’s narrated in third person, and is very well written. The characters jump off the pages because they’re realistic and have great personalities. March is a great character. He’s witty, smart, and a good leader. Jules is also a good character. She is talented and uses that talent to help her and her friends. Izzy and Darius are great secondary characters. They definitely fill in the gaps and add depth to the story line. The characters are not perfect, which is good. Mistakes are made and lessons are learned. There are twists and turns along the way, along with betrayal, success, failure, lies, and friendship. So yes, I actually really liked this book. My 15 year-old son enjoyed it also! There’s only one thing: they’re thieves. Yep! That’s the only thing I didn’t like. I hate it when you’re encouraged to root for the “bad guys,” like in the movie The Italian Job. Unfortunately, that is what happens here; to make it even worse, they’re kids. So you’re cheering for these kids to successfully steal things. Not allowing my kids to read these books definitely crossed my mind because I didn’t want them getting any ideas. Kid thieves = no bueno. But with that in mind, it’s a really good book. Darn! They got me! They sucked me in! Just make sure you have a little chat with your kids before they read it to tell them that what the kids in the book do is NOT ok. 🙂

Rating: PG (There’s no profanity or “intimacy.” There is some violence with the death of a character, some fighting, and a few chases. Also, these are children who are thieves.)

Recommendation: 4th grade and up (It’s a good middle-grader and YA book.)