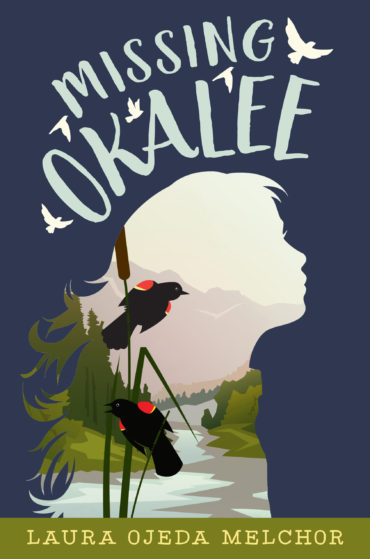 When my sister and I were younger we were best friends. We would sneak board games into our room and play at night after our parents tucked us in (Sshhhh! Don’t tell my mom!) Then, when we were teenagers, we kind of fell away from each other. We were quite different from each other. I hated it but didn’t know how to fix it. Time. That’s what we needed. Time. Now, many years later, we are good friends again. I love having a sister! We hang out and chat for hours about how fun raising teenagers is. (Lucky for me, I have four brothers who married four amazing women, so now I have five sisters!) Missing Okalee by Laura Ojeda Melchor tells the story of two sisters and the tragedy that occurs in their family.

“When compared to her nearly perfect little sister, Phoebe Paz Petersen feels she doesn’t measure up in her parents’ eyes. Okalee is smart and beloved for her sunny disposition, which makes it hard for Phoebe to stand out in their small town in Montana. But if she can get picked for the coveted solo in the school choir, she’ll stop being a middle-school nobody and finally get her chance to shine.

Despite her sister’s annoying perfection, Phoebe actually loves spending time with Okalee. They have one very special, secret tradition: River Day—when they hold hands and make their way across the cold, rushing Grayling River, to celebrate the first hint of spring. This year’s River Day crossing, however, goes horribly wrong, and Phoebe’s world is suddenly turned upside down.

Heartbroken and facing life without Okalee, Phoebe is more determined than ever to sing the solo in the school concert as a way of speaking to her sister one last time. But Phoebe’s so traumatized by what happened, she’s lost her beautiful singing voice.

Kat Waters wants the choir solo for herself and is spreading a terrible rumor about what really happened to Okalee on River Day. If Phoebe tells the truth, she believes her family will never forgive her and she may never get to sing her goodbye to Okalee. Even worse, somebody is leaving Phoebe anonymous notes telling her they saw what really happened at the river.

Missing Okalee is an empathy-building novel about the unbreakable bond between sisters and finding the courage to do what’s right amid heartbreak and tragedy.”

What do I say about this book? It’s a good book but grab your tissues—you’ll need them! The book is well written. I liked the writing style of the book and thought it flowed well. It’s written in first person with Phoebe narrating. Ms. Melchor does a good job with the descriptions and the dialogues.

Missing Okalee is a good and well-written story, and I enjoyed it—through the tears. I understand that the author is trying to give middle-graders a chance to learn about difficult circumstances in a safe environment. Books are a great place to process hard emotions and feelings because you feel like you’re living through the story. Being that intimate with a story, characters, and situations allows you to see those things through different lenses, and that allows you to better understand them. It also allows you to grow, change your mind, and feel more empathy.

I completely understand what Ms. Melchor is trying to do with these middle-graders. However, in my humble opinion, it’s too much. Wow. This is a difficult read for an adult, let alone a child. Missing Okalee deals with the death of a very close family member, bullying, depression, guilt, honesty, a contemplated suicide, and lots of feelings and emotions in between. It’s a lot to handle in one story. I think YA is a better age group for this book than middle-graders. The characters are in middle-school also, so I think it fits YA better.

For the correct age group, this book could be a very powerful teaching tool. There are many lessons taught in this book, and I think it does help the reader to better understand honesty, grief, guilt, and knowing that what you think you see may be deceiving. I also think it will help readers to be less judgmental and to try and look at things from someone else’s point of view.

Content Rating: PG-13 (There isn’t any profanity or “intimacy” in this book. There is some minor violence with fighting and bullying. There is, however, the death of a close family member, bullying, depression, and a contemplated suicide. )