Skip to content
My Fair Gentleman by Nancy Campbell Allen 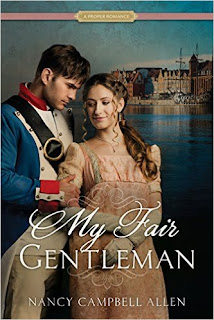 My first Book Chat! If you don’t want to read my review then just watch the video! I’m so excited for this new feature on my blog! (Be nice, it’s my first-ever video 🙂
Follow my YouTube Channel: The Readathon: Book Reviews and More!
Blurb:
“Jack Elliot dreams of being the captain of his own ship. But then his grandfather, the Earl of Stansworth, names Jack as his heir–with a caveat. Jack must impress the aristocracy, or else his mother and sister will remain in poverty. Can a rough-and-tumble captain be transformed into a gentleman of society?
Ivy Carlisle is willing to try. Employed as his tutor, she begins teaching Jack the ways of high society, but she quickly discovers that this dashing sailor is brash and bold, opinionated and passionate. If she’s not careful, Jack might end up teaching her a thing or two about romance.
Sparks fly when the sailor meets society, and Jack soon learns that his challenge isn’t surviving the ton, but surviving the conspiracies against him–as well as keeping himself from falling madly in love with his new tutor.”
My Review:
This is one of those books that you read for pure entertainment. It’s predictable, cheesy, and cliched, but isn’t that what we all want in a romance? I thought it was a sweet love story, with some crazy accidents added into the mix. The characters are fairly well done. I liked Ivy a lot. She has a cute personality, is likable, and seems realistic. I liked all her “properness.” (Yes, I just made up that word.) I could picture her all prim and proper, and yet I liked that she learned to bend those rules if the situation warranted it. I liked Sophia too. I liked the relationship between her and Ivy, and I also liked the relationship she had with her brother Jack. Jack is an interesting character. I didn’t like him very much at the beginning of the story. He seemed too irritable and grumpy. He wasn’t very kind. As the story unfolded, though, he has some experiences that seem to soften him a bit. He was a much better character at the end of the book. This is a fast, easy read, and may not be too deep or require a lot of thought, but it’s perfect for just being entertained; getting caught up in a story and being transported to a time of Earls, fancy balls, and rolling estates.
This book is a proper romance, and it fits perfectly in that genre. It’s clean! There’s no language or “intimacy.” There is definitely some kissing, but that’s as far as it goes. There is some minor violence and some blood, but it’s not overly graphic. The two things that up my rating to a PG-13 are that in the book it briefly states that the women are constructing a home to help women who were “women of the night” to get out of that line of work, and it also states that one of the characters got into some trouble with a man before they were married. It doesn’t ever go into specifics, in fact it’s quite vague, but I don’t want my 11 year-old daughter asking me about either one of those things. Overall, I liked the book. It was a fast read, and was a good distraction from laundry. 🙂
Rating: PG-13 (There isn’t any language or “intimacy.” There is some kissing and some minor violence. There is a point where the characters discuss building a home for former “women of the night” to come to and learn a new occupation. There is also a character that gets into trouble before she is married; it never comes out directly and says what happened, it’s quite vague.)
Recommendation: YA (13 and up)