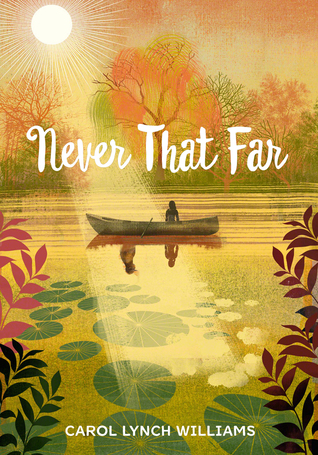 Book Review of Never That Far by Carol Lynch Williams

My father-in-law passed away less than a year ago, so the pain is fresh. We’re still celebrating “firsts” without him. First Christmas. Birthday. Easter. Our children will still occasionally cry over his passing. It’s tough, and even though we do have a belief in an afterlife, we miss him immensely. In Never That Far by Carol Lynch Williams, Libby and her father mourn the loss of her grandfather. Libby’s experiences may be singular to her, but her feelings of loss and mourning are universal.

“Libby Lochewood is twelve years old when her grampa dies of a heart attack. She is devastated at losing her best friend. Now that he’s passed on, it’s just her and her father, and he is so overcome by grief that he can barely get out of bed in the morning.

The night of the funeral, though, Grampa’s spirit appears in Libby’s bedroom and tells her three important things; first, that she isn’t alone or forgotten—‘The dead ain’t never that far from the living,” he says; second, that she has ‘the Sight’—the ability to see family members who have died; and three, that there is something special just for her in the lake. Something that could help her and her father—if she can find it.

Libby begins her search along with her friends Bobby and Martha, but it’s hard to know if they’ve found what Grampa wanted her to find since they don’t really know what it is. As Libby’s father falls deeper and deeper into depression, Libby and Grampa work together to help her father believe that their loved ones who have died are much closer than he thinks. But it will take all of Libby’s courage and her gift of Sight to convince her father that the dead are never truly gone.

Set in the lush, natural landscape of southern Florida, Never That Far celebrates friendship, hope, and the power of family love.”

The pain that accompanies the loss of a loved one is universal; not many are immune. On the other hand, each individual person deals with grief in his or her own way. Some may find comfort in visiting the gravesite while others may find solace in journaling or sleeping. Libby and her father have very different experiences after her grandfather’s passing. Libby handles it ok because her grampa’s spirit visits her each night and comforts her. He visits his son too, but his son doesn’t see because of a lack of belief. Although I haven’t ever seen the spirits of my loved ones who have passed, I believe that there is an afterlife. I believe that I will see them again. If nothing else, that thought gives me comfort.

There were many things that I liked about this book. I liked Libby’s voice. She’s stubborn, determined, and caring. Although she may not listen to her father, she knows what needs to be done. She sets out to do it, no matter what. Bobby is such a good friend. I liked his character a lot. Martha represents what many people may feel: that Libby is crazy.

Libby’s father has lost a lot. He’s lost his parents and his wife. The grief overcomes him. He represents many who are consumed by the pain of losing someone. Libby gets frustrated because he isn’t always present for her, but he tries. The preacher character confused me. I’m not sure why her character was included in the story.

Overall, I liked this book. I think it has some good messages: the importance of family, faith, friendship, and moving forward. It will be especially helpful to someone grieving the loss of a loved one. This book is geared toward YA, and I think it is fine for that age group. It does have a religious overtone, so YA with a religious background will benefit the most. Also, it might be a good idea for parents to discuss the book and some of the issues with their children.

Rating: PG (There’s no profanity, no “intimacy,” and no violence. There are some more difficult themes discussed.)