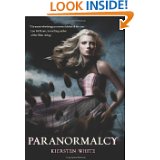 (Summary taken from the inside book jacket) “Weird as it is working for the International Paranormal Containment Agency, Evie’s always thought of herself as normal. Sure, her best friend is a mermaid, her ex-boyfriend is a faerie, she’s falling for a shape-shifter, and she’s the only person who can see through paranormals’ glamours, but still. Normal. Only now paranormals are dying, and Evie’s dreams are filled with haunting voices and mysterious prophecies. She soon realizes that there may be a link between her abilities and the sudden rash of deaths. Not only that, but she may very well be at the center of a dark faerie prophecy promising destruction to all paranormal creatures. So much for normal.”

After reading “Rebecca” I really needed something lighter and more fun, and this definitely fit the bill. I started with hesitation because a friend had told me she hadn’t liked it, but I found it a surprisingly fun, easy, and quick read. I really liked the characters, especially Evie and Lend, and I felt like they were well-developed. It only took me a few hours to read, which was really nice, and I thought Ms. White did a good job with the story line. It had some fun twists and turns and everything you could want: action, romance, good vs. evil, and a mixture of every kind of mythical creature. It had some hints of “Twilight” and “Fablehaven” yet held its own. I did like the previous two books better, and think they are slightly better written, but this was easy and fun. I would recommend it if you want to read something that is easy and entertaining. I loved that it was completley clean! There wasn’t any language and no “physical intimacy.” There was some death of creatures and some violence associated with that, but there are commercials that have more violence than this book, so it’s easy to recommend.

Rating: PG-13 (A few characters die and there is some minor violence associated with that. A faerie does kidnap Evie at one point and that scene is a little distressing, but she is able to get out of it okay. There is some kissing, but it’s early teen-age kissing so it doesn’t go further than that.)

Recommendation: 14-15 years and up. I think it’s fine for mid-teens. I think girls would like it more than boys, but you never know. It may even be okay for a mature 13 year-old.