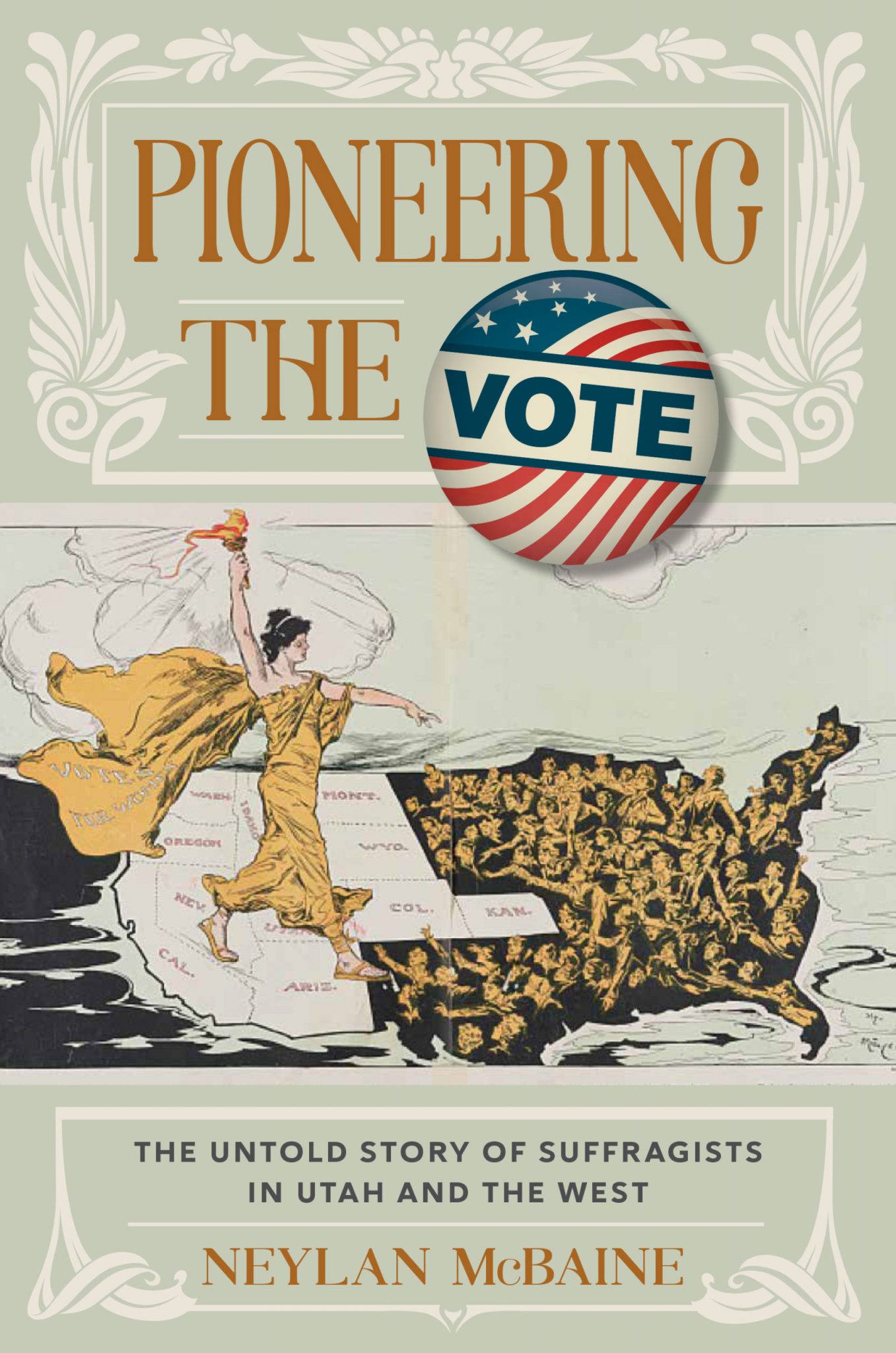 Book Review of Pioneering the Vote by Neylan McBaine

I dedicate this book review to Mrs. Christie Pitts. In high school I took Mrs. Pitts’ AP American History class. I passed, thank goodness! Mrs. Pitts was an amazing teacher! My senior year, Mrs. Pitts started a new class: Women in History. I was a member of the inaugural class. Yes, it was all girls, and we LOVED it! This class focused on prominent women from American history, along with many women we had not ever heard of. It was so fun to look at history through some different viewpoints and to get to know some amazing women from our history. Mrs. Pitts inspired me to do and be better. She told us stories from her life that showed how far women had come in just her lifetime. I loved that class! It did cause some controversy, though! One day someone put a sign on her door that said, “Feminism 101.” We laughed about it and left it up as a badge of honor for a long time. It wasn’t quite true, but…what do you do?? Anyway, Mrs. Pitts would have loved this book! Here’s my review of Pioneering the Vote by Neylan McBaine.

“In 1895, Utah’s leading suffragist, Emmeline B. Wells, welcomed her friends Susan B. Anthony and Reverend Anna Howard Shaw to a gathering of more than 8,000 people from around the West at the Rocky Mountain Suffrage Convention. They were there to celebrate the suffrage movement’s recent wins and strategize their next triumphs. Pioneering the Vote tells the remarkable, largely unknown story of the early suffrage victories that happened in states and territories in the American West. With the encouragement of the eastern leaders, women from Utah, Colorado, Wyoming, and Idaho came together in a unique moment of friendship and unified purpose to secure the vote for women in America.

Told in alternating fiction and non-fiction narratives, this book offers a rare look at the suffrage movement from the point of view of the women in the western United States. With 2020 marking the centennial of the passage of the Nineteenth Amendment, join with these remarkable figures from the past to celebrate women’s right to vote.”

Unfortunately, women of color in the United States still had many barriers to their enfranchisement. It wouldn’t be until many years later that women of color, Native American women, or women of Asian descent were able to vote. Even though many had been given the right to vote many years previous, there were places around the country that placed barriers in the way of their voting.

I’ve lived in Utah my whole life. I’ve lived in several different places around Utah, but always in Utah. I’m a member of the Church of Jesus Christ of Latter-day Saints, and I know the history of the Church. I thought I knew my state history quite well; I didn’t know this history. How had I never heard of these women? Utah tried many times to gain statehood and was unfortunately turned down because of polygamy. (FYI: The Church of Jesus Christ of Latter-day Saints has not practiced polygamy in a VERY long time. The practice was discontinued in 1890.) In an effort to overcome that, Utah enfranchised its women. On February 12, 1870. Yes! Utah women voted for 17 years! Then, in 1887 they were disenfranchised.

I could go on and on! This book details the Rocky Mountain Suffrage Conference that was held in Salt Lake City, UT in 1895. Susan B. Anthony and the Reverend Anna Shaw attended, along with other prominent women suffragist activists of the day. The main point of the conference was to celebrate the vote to keep women’s enfranchisement in the Utah constitution, and to decide how to move forward to help other states around the nation achieve the same thing.

This book is very well researched and well written. There is some fiction in dialogues and such, but Ms. McBaine used diaries and newspaper articles to try and make it as accurate as possible. Many of the speeches that appear in the book were taken verbatim, as they were given at the conference. I didn’t know Susan B. Anthony came to Utah, or that she was good friends with Emmeline B. Wells. I didn’t even realize that Utah was the first, then really the third state to allow women the vote in their constitutions.

I learned so much reading this book, and I loved it! It focuses a lot on Utah, but also discusses the history of Wyoming and Colorado (the first and second states to allow women to vote and to guarantee it in their constitutions). The book goes on to talk about Idaho and California, and some of their struggles with women’s enfranchisement as well.

I know things are not perfect in our country; I know there are always things we can do to improve and make things better for each of our citizens. However, I am so thankful for this country. I’m thankful for the freedoms we enjoy, and I’m grateful for all those who have come before and worked tirelessly to make things better for me today. What an honor and privilege it is to be able to study the candidates in this upcoming election, and to be able to vote for the person I think will do the best job of running our country. What am I going to do to honor the women who have come before? What am I going to do to recognize and celebrate this 100th anniversary of the passing of the 19th Amendment? I am going to VOTE in November, and I challenge you to do the same. Don’t get caught up in the emotions and the rhetoric. Study the candidates. Read their platforms, look at their histories, and choose the person that best fits what you want in a leader. Do not take this privilege for granted.

I highly recommend Pioneering the Vote by Neylan McBaine, especially as we celebrate the momentous occasion of the 100th anniversary of the 19th Amendment.

Rating: PG (There’s no profanity, violence, or “intimacy” in this book.)