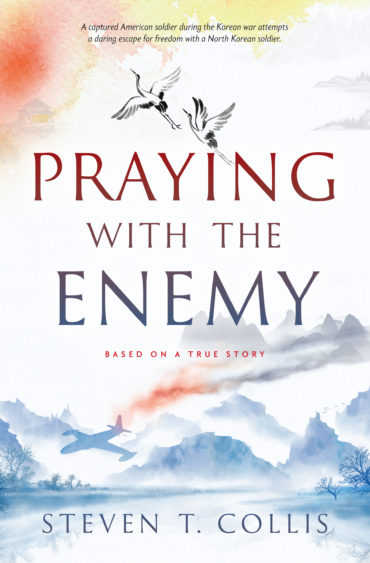 Book Review of Praying with the Enemy by Steven T. Collis

I have read many books about WWll, the Revolutionary War, and the Civil War. Praying with the Enemy by Steven T. Collis happens to be the first book I have read about the Korean War. I don’t know much about this particular war, so I was excited to learn more about it. Wow. Just wow. Why don’t more people know about Captain Ward Millar??

Based on the true story of an American POW during the Korean War and a North Korean soldier who become unlikely allies united in their shared faith in God during a daring escape to freedom.

When pilot Captain Ward Millar is forced to eject over enemy territory in North Korea, the ejection explosion snaps both of his ankles. Unable to walk, he is easily captured by North Korean and Chinese soldiers who interrogate, threaten, and starve him for strategic wartime information. He feeds the enemy false information while plotting his escape. But it’s only a matter of time before they discover his lies. He knows it will take a miracle to gain his freedom, but his previous self-reliance on his own capabilities has never included appealing to a higher power. If only he had faith like his wife, Barbara, whose firm belief in God can move mountains.

North Korean soldier Kim Jae Pil was raised to believe in the power of prayer, but, knowing the Communist Party’s views on religious groups, Kim and his family must keep their Christian faith secret. He is desperate to escape the army, return to his family, and then flee to South Korea.

With Millar imprisoned and unable to walk, and the North Korean army increasingly suspicious of Kim’s actions, it seems impossible that either man will find the freedom they so desperately desire. But when these wartime foes cross paths, they find in each other an unlikely ally. Despite speaking different languages, Millar and Kim find common ground in their fragile faith and must rely on each other to undertake a daring escape.

Praying with the Enemy is a story of courage, determination, unlikely friendship, and enduring faith.

What an amazing story!! This book is historical fiction—based on a true story. Captain Ward Millar and Kim Jae Pil should have been enemies, but instead became friends and allies.

Praying with the Enemy is written so well! I love Mr. Collis’ writing style in this book—it hooked me from the very beginning. His writing flows well, is easy to read and understand, and his descriptions make it seem as if you are sitting in a disgusting POW camp right next to Captain Millar. I could feel the wrath of Kang and the other officers.

Collis has amazing character development in this book. I liked how he also focused on Millar’s wife and family at home because it gave the story more depth. Not only did I want Captain Millar to escape for him, I also wanted him to escape for his wife and family. Adding them in also gave more perspective to the timing and circumstances.

Although this book is fiction, Collis’ research shows through. He did a great job of fictionalizing a true story. He kept as much truth as he could but took some liberties in order to give him more control with characters and pacing.

I loved this book! I learned a lot about the Korean War and about the power of hope and faith. Once I started Praying with the Enemy, I could not put it down! It kept me engaged and turning pages until I finished it. It’s so good!

Content Rating: PG-13 (There’s no profanity or “intimacy.” There is some violence–it is a war and he is NOT treated well as a POW.)

2 thoughts on “Praying with the Enemy by Steven T. Collis”