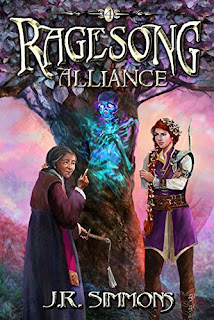 “The Dread King’s apprentice surrounds Klyle’s final stronghold as he tries to unite the southern territories. With Brael’s forces closing in on the exiled king, the need for an alliance with the Riders of Southern Reach grows stronger. Together with the peace-loving Treespeaker and the wildly beautiful Kishahk of the Stoneriders, Klyle must unite the remaining free territories and prepare for the inevitable invasion.

Jake, Sam, and their companions discover an ancient warrior with a sure knowledge of the Trichord, their only hope to win the fight against Brael and his Elites. The journey takes them through savage lands with familiar foes as an old enemy stalks them. Will their quest for the legendary artifact end the war? Will they even survive the journey to find it? When Brael changes tactics and moves to end an alliance before it can even begin, the war comes to Klyle. Can he find a way to convince the Riders of the danger Brael poses before its too late?”
My Review:

Wow! The action continues in this new book of the Ragesong series. Jake and Sam meet a couple of new characters that will hopefully be able to help them in the fight against Brael. These two new characters are definitely unusual and unique! There’s a bit of mystery surrounding them too; are they good or evil? Klyle continues his quest to rally the southern territories, and they may meet up with a few old friends as well. This book did not disappoint–except the cliffhanger ending!! Ahhhh!!! So hopefully there’s a fifth book coming soon! I liked learning about the new characters, and I liked that they introduced a few new tricks that Sam and Jake didn’t know about in regards to ragesong. It was fun watching Jake and Sam as they improved their skills and continued to learn about their companions, themselves, and each other. This book is definitely action-packed, full of mystery, young love (or young lovers’ spats), and character development. I thought it was well written, as were the first three. The character development was done well, and it was easy to read and understand. If you enjoyed the first three in the series you will for sure want to read this one!!

There is no profanity (yay!) or “intimacy,” besides maybe a brief kiss. There is some tension between our two young heroes, which is kind of annoying, but doesn’t really amount to much. There may also be some jealousy. There is quite a bit of fighting and violence in this book, as well as in the previous books. They are in a war, so there is fighting, and some of it is graphic.

Rating: PG-13 (There isn’t any profanity or “intimacy,” but there is quite a bit of fighting, and violence, and some of it is quite graphic and descriptive.)

Recommendation: 13 years-old and up (YA approved!)