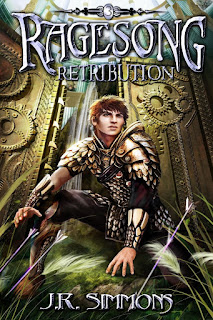 Blurb (from amazon.com):
“While the Dread King advances steadily through the land, a resistance movement led by the exiled king of Kardonin scrambles to turn the tide of war. King Klyle sends Jake, Sam, and their Changeling companions on a quest in an effort to combat Brael and his powerful Elites. Together they journey forth into a new kingdom, searching for information about an ancient artifact of unknown power that just might be the only thing able to stop Brael and his dark forces. Meanwhile, Klyle and two of his most loyal soldiers travel with the mysterious leader of a clan whose people were once his sworn enemies. Klyle faces obstacles and threats as he works to secure an alliance with the Bloodmox riders of Southern Reach, while Jake and Sam find troubles of their own among the rich and powerful Traders. Will they find the fabled treasure of Fermicia? Can Klyle overcome the ghosts of his past and join the riders to his cause? Each second counts as Brael draws nearer to his dark and twisted goal.”

My Review:
I was so excited to read this book! I couldn’t wait to learn more about Jake and Sam and their adventures! Will they finally defeat Brael? I hate that guy. Anyway, this book did not disappoint! Once again, I got sucked into the story and couldn’t put it down. The story line didn’t progress a whole lot, but enough that I need to get my hands on the next book. Pronto. One of my favorite parts was with Jake and Sam in Yolieseleth when they participated in the Shilaak Milikum. I loved the descriptions of the laaks and their designs, especially Chet’s. I thought that whole part of the book was so fun, and it was great to see how Sam and Jake were able to grow as individuals, and how Jake was able to hone in on his Ragesong. In this book we were able to learn a lot more about Klyle and his past, and I thought it explained a lot; I learned so much about his relationship with Brael and why it turned out the way it did. I wasn’t a huge fan of the place Klyle ended up in, and his situation, but hopefully the next book will make that situation a little better. The book is well written, and I like the writing style because it just sucks you right in. The descriptions of the cities and the different creatures are very well done. I have really enjoyed this series. This ending is quite abrupt, and it definitely leaves you hanging, so I’m hoping the next book comes out soon!! There isn’t any profanity or “intimacy.” There is some teenage flirting, but it’s harmless and cute. There is, however, quite a bit of violence, and some of it is quite graphic. There is a lot of fighting and a few characters die. The violence is the only negative with this book, and it is the reason for the higher age rating. As a bonus, the cover art on this book is much better than the first book’s. 🙂
Rating: PG-13 (There isn’t any profanity or “intimacy,” but there is quite a bit of violence, and some of it is graphic.)
Recommendation: 13 years-old and up  (YA approved!)
Disclosure: I did receive a free copy of this book in exchange for my honest review.