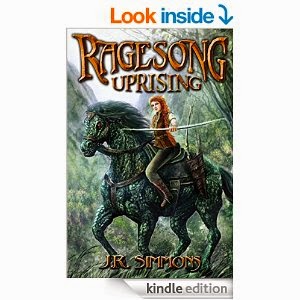 Exiled Fermician king Klyle, now free from the clutches of Brael, works ceaselessly with Changelings Joraus and Swyf to resist to the evil spreading through his kingdom. Though the seeds of rebellion stir faintly in the hearts of his people, fear of the Dread Lord makes recruiting difficult. Not knowing where else to turn, Klyle wonders if children of legend who once rescued him from his mountain prison might be the key to saving his kingdom. Three years later after rescuing Klyle, Jake and Sam can’t forget their wondrous and frightening journey. Fully aware they might be summoned back at a moment’s notice, the two friends work diligently to prepare. When the Changelings come calling, the teenagers are whisked away once more to the beautiful and dangerous Fermicia. Their connection with Ragesong has grown more powerful than ever, but will it be enough to take on the might of the Dread Lord and his powerful new apprentice?

I enjoyed the first book in this series, so I was excited to read the sequel. All of my favorite characters were back, and a few new were added. I love Jake and Sam, and I really liked the growth and development of these two in this book. They both learned a lot about themselves and each other in this book, and I enjoyed watching them find themselves.  I like that Sam and Jake were able to do things that showed off their own strengths. They are not one person, they are two individuals with different strengths and weaknesses, and they are able to help each other because of that.
Klyle is still a good, strong character in this book, but he did kind of annoy me with his prejudices. I guess we will someday know why he won’t accept Sam’s choice. Hopefully that little piece of information will be in the next book? I still hate Brael, but I still really like Joraus and Swyf. I enjoyed learning a little bit more of their history and of their people. The character development in this story is well done, as usual, with Mr. Simmons’ writing. Mr. Simmons has a way of pulling you into the story and not letting go until the end. The ending was realistic and fit well in the story. I wasn’t a perfect, tied up nicely with a bow, type of ending, which is good, and it did leave you hanging a little. Of course, it just gets you excited to read the next book. I thought the plot progressed well, and I learned a lot about each of the characters and their history. If you enjoyed the first book you will definitely like this one!

There isn’t any profanity (that I can remember)…thank you!!! There isn’t any intimacy either…thank you! There is though, quite a bit of violence. They are fighting a war. Some of the details are quite graphic and gruesome, which is why it receives an older rating. A lot of people die, and of those deaths, some of them are quite graphic. I really enjoyed this book, and can’t wait for the next one!

Rating: PG-13 (No profanity or intimacy, but lots of violence. They are fighting a war, and there are many deaths, injuries, and graphic details.)

Recommendation: 13 and up (YA approved!!)