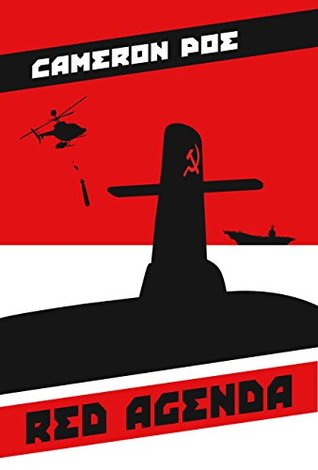 I don’t know much about submarines, but I know I don’t want to ever go in one! Can you say SCARY? My husband wants to go on a cruise and I can’t even get myself to do that! I like land. I like land a lot. Being in the middle of the ocean scares me so much, and then being in a metal contraption under all that water is even scarier! There are way too many things that can go wrong. Now, what happens when a Russian sub goes missing? That thought is a little scary too! Where is it going? What’s the plan? Find out more in my book review of Red Agenda by Cameron Poe.

“The most sought after commodity in the world is power, and when money is no object, power is up for grabs. Desiring autonomy, one small nation develops an unlikely plan to procure a nuclear-powered submarine. If all goes as intended, the Middle East will destabilize and the OPEC Alliance will crumble. Yet as money might buy power, there’s no guarantee that it buys loyalty. So when the submarine breaks the ocean surface it doesn’t travel to the Middle East, it sails for Russia, in an attempt to return the nation to its Soviet roots.”

When I was a teenager I read The Hunt for Red October, and I really enjoyed it. I haven’t read a book about submarines since then, and I think it was high time! Although I don’t know much about OPEC or the old Soviet Union, I enjoy a good story. There were several plot twists and turns, and there was a good hint of mystery as to what would really happen.

Most of the characters are well developed. One of them is way over-the-top, almost to the point of being comical. The others characters have some strengths and weaknesses, and they seem much more realistic. I liked George, Nick, Marina, Jim, Dan, Sharon, and a few others.

I thought it was fairly well written. It was a little hard to follow because it quickly and often jumped from one group of people to another. The only thing that let you know of the switch was a little missile. Consequently, it would take a minute to figure out who you were reading about. There are also a lot of characters in many different places, and it was all a bit difficult to keep track of at times. There were also quite a few errors that an editor and proofreader could have helped fix.

I liked how the story all came together in the end, but thought that there were still a few holes. You do eventually figure out how all the pieces fit together, and it’s quite the tale! I liked how the author used all the different military technologies with subs, destroyers, helicopters, tanks, etc. If you like a good military/political/action/mystery/adventure story, this book is for you! Overall, I liked it. Sometimes it’s nice to try a different genre for a change.

Rating: R (Profanity, including many “f” words. “Intimacy,” including scenes and innuendos. Violence including war atrocities, murder, bombings, fighting, and the death of several characters.)