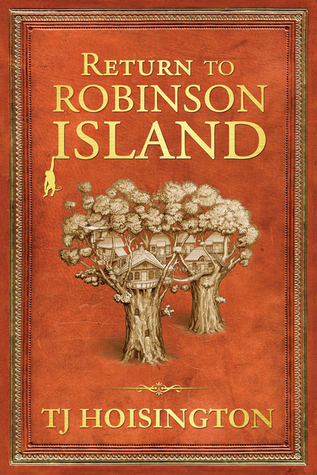 Book Review of Return to Robinson Island by TJ Hoisington

Remember when I read The Swiss Family Robinson last July? In my review I said that I had never read it before. Well, I hadn’t. But, what prompted me to read it right then? In July 2020? I read it because I had received an email from the author of this book requesting a review. You can’t really read the sequel without reading the original, right? Maybe some people can, but you know me…I had to read the original first! When TJ Hoisington sent me a message requesting a review, I was surprised and a little star-struck. He’s kind of famous. He’s a public speaker, and I listen to his podcast, Unleash Your Greatness Within. He’s also written a few other books. I hope you enjoy my review of Return to Robinson Island by TJ Hoisington.

“Return to Robinson Island is an entertaining adventure story that has a thread of romance weaved throughout. It takes place fifteen years after the Robinson Family’s famous shipwreck on a remote island in the East Indies. The story highlights Ernest Robinson, who is now twenty-seven years old, engaged to be married, and is a 1st Lieutenant in the British Royal Navy. Ernest has distinguished himself as a fearless fighter, respected leader, God-fearing, and loyal friend. However, his loyalty is tested when his commanding officer, Captain Charlie, is court-martialed on war crimes and Ernest has no choice but to tell the truth – even if his testimony sends his former Captain to prison.

When reports reach England that a vast treasure trove has been found on Robinson Island, Ernest and his family find themselves in mortal danger when Captain Charlie vows to retrieve the treasure for himself and wreak revenge on the entire Robinson family.

Will the Robinson Family survive the attack? Will Ernest ever see his fiancée again? One thing is certain; they won’t give up the island – or their lives – without a fight!”

Wow! What an adventure! When I read a sequel, especially a sequel that is written by a different author than the original book, I worry. I worry because I have read some terrible sequels. Thankfully, this book does not fit into that category. This is a great sequel! I feel like Hoisington did a good job continuing with the feeling and intent of the original book.

This book is well written. The story flowed well and was easy to follow. I liked Hoisington’s writing style and felt like he did a good job mimicking the writing style in the first book. The characters are well developed, and the new characters fit in well with the story. One thing that impressed me was that the characters stayed true to themselves throughout, and that is difficult to do when you didn’t write the original book. Hoisington has a knack with descriptions. When you’re reading you feel like you are right there in the story because of the great descriptive words he uses.

With that, Hoisington also uses some great vocabulary words, and I love that! I’ve noticed over the past few years that vocabulary has tended to get easier and easier in many of the books I’ve read, especially YA and MG books. I’m glad that some authors still take the time to craft the language in their sentences and use more difficult words.

This story is also complex, with more than one story line. I like the complexity it adds, and I like how the story lines weave together in the end. Another thing I liked was the importance this book puts on relationships, especially families. It’s easy to get into a story, and the plot line, and forget about the relationships. Hoisington does a great job of putting an importance on the people and how they relate to each other and work together.

Overall, I really enjoyed this book. I think Johann David Wyss would be very happy with this sequel to his book! A little teaser here…Hoisington wrote another book in The Swiss Family Robinson series. It follows this book, Return to Robinson Island. It’s called Swiss Family Robinson: Secret Discovery. I’ll be reviewing it sometime (I haven’t read it quite yet…). So look forward to that!

Content Rating: PG-13 (There are a few profane words, but there isn’t any “intimacy” except for brief kissing. However, there is quite a bit of violence, and some of it is a bit graphic. Many characters die, and not in nice ways.)