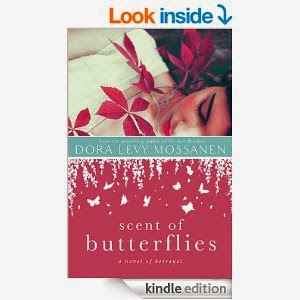 Scent of Butterflies by Dora Levy Mossanen
(Summary taken from the back cover of the book) “Such audacity she has, Soraya, a woman who dares to break free of the diamond-studded leash of her culture. A woman who refuses to accept the devastating betrayal her husband perpetrated. A woman who refuses to forgive her best friend. Soraya turns her back on Iran, fleeing to America to plot her intricate revenge. The Shah has fallen, her country in in turmoil, her marriage has crumbled, and she is unraveling. The cruel and intimate blow her husband has dealt her awakens an obsessive streak that explodes in the heated world of Los Angeles. Yet the secret Soraya discovers proves far more devastating than anything she had imagined, unleashing a whirlwind of unexpected events that will leave the reader breathless.”
I just finished this book and I’m almost speechless. I liked the character development. I definitely felt like I knew and understood each character well. Even though I didn’t really like any of the characters, I did think they were well developed. I can’t even imagine how I would react if I saw my husband in my bed with my best friend. It would be awful. Terrible. Horrible. But, I can’t imagine I would react the way Soraya did. Wow. She seriously went crazy. I just couldn’t relate to her and her very dark side. She was over-the-top crazy, and it bothered me because it didn’t seem real. I mean, I have to imagine that seeing what she did would throw her for a loop, but I definitely think she took it too far. It made me uncomfortable reading about it. I thought a lot of it at the beginning had unanswered questions, like where did she get the money to just go to LA and stay there? Those questions were answered eventually, which made the story at least a little more plausible. Aziz, Parvaneh, Baba, Madra, and Mamabozorg were all interesting characters. I didn’t really like or relate to any of them, but I thought they were well thought-out and had interesting stories and histories. There was a lot of Iranian history and culture, and I’m, unfortunately, not smart enough to know if it was all accurate. If it is accurate then I thought she painted the picture well. Her writing style is difficult to read. It is full of descriptions, metaphors, similes, and metaphorical language, which you would think would be good, but at times it overpowered the story and I had to go back several times to re-read passages because I really had no idea what she was talking about. It seemed choppy also. Unfortunately, this book was too dark and bitter for me to really enjoy it. Soraya became seriously overcome with revenge, hatred, and bitterness. She ended up making things way worse than they should have been. I read the last page at least three times and I think I understand what happened, but because her language is so busy, I’m not quite sure I’m accurate in my conclusion. Maybe it’s just me and I’m not smart enough to read this book, but it was so busy (like a home littered with nick-knacks on every shelf, table, and cupboard) that it was hard to see past that and into the story line.
There is language in this book, especially the “f” word. There are many of those. There is also a lot of “intimacy.” There are scenes, innuendos, suggestions, affairs, details, thoughts of, longings for….a lot. There is premeditation of murder, and the deaths of thousands of butterflies. How she fits the butterflies into the story is a little strange and morbid.
Rating: R (Many “f” words and other language, lots of “intimacy” scenes, innuendos, thoughts of, affairs, etc.)
Recommendation: Adult
Disclosure: I did receive a free copy of this book in exchange for my honest review.