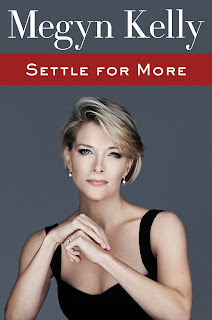 Settle For More
by
Megyn Kelly


Blurb:
“In the three years since her show The Kelly File premiered on the Fox News Channel, Megyn Kelly has cemented her reputation as one of the most respected, hardest-hitting journalists in America. Tackling issues from both sides of the aisle, live on prime time five nights a week, Megyn has embraced difficult questions and pressed for real answers, redefining the face of news for her more than two million regular viewers. Now, in her debut book, Megyn goes behind the scenes of the stories and the storms that landed her in the anchor chair of the most successful news broadcast in cable news. Having grown up in a family whose values rejected the ‘trophies for everyone’ mentality, Megyn traces the experiences that shaped her professional ascent–from her father’s sudden, tragic death while she was still in high school to the events that propelled her rise in journalism. Speaking candidly about her decision to ‘settle for more’–a motto she credits as having dramatically transformed her life at home and at work–Megyn discusses how she abandoned a thriving legal career to follow her dream in the news business. Through her unique blend of hard work, humor, and authenticity, she has won fans across the political divide. Megyn also opens up about the controversy that made her, unwillingly, one of America’s most-talked-about public figures, giving her side of Donald Trump’s feud with her while sharing never-before-heard details about the first Republican debate and how she was able to persevere through the difficult aftermath. In addition, Megyn sheds light on the challenges she has faced as a professional woman and working mother, revealing her approach to issues of gender in the workplace, as well as how her success is rooted in the adage ‘Be so good they can’t ignore you.'”
My Review:
No matter what your political viewpoints are, no matter where you stand on the issues, and no matter your opinion about Fox News, you have to admit that Megyn Kelly is a strong woman. Her hard work ethic, determination, and attitude have worked to put her at the top of broadcast news. I saw her at the Republican debate when she asked Donald Trump the infamous question that resulted in their feud, and I was curious to know more about that whole situation. I hoped her book would shed some light on the subject. I had also heard about Roger Ailes and the women reporting that he had sexually harassed them, and I hoped to learn more about that situation as well. So I picked this book up at the library. It was slow going at first. Learning about her childhood and youth years was interesting, and it always helps you learn more about the person, but it was definitely slow. I really don’t know much about practicing law, so maybe that’s why, but I though those years in her book were also a bit slow. However, I was very impressed with her courage. Making the decision to leave a high powered and high pay job to go do something completely different with a lot less money would be a difficult decision. If the job is killing you though, maybe it’s an easy decision? I thought the book got much more compelling once she got to the last few years. The “Year of Trump,” as she calls it, sounds awful. It kind of scared me, actually, that someone running for president of the United States could use his resources (and supporters-real people) to wage such a bitter vendetta against a reporter. Yes, she asked a difficult question, but really?? That much?? The section about Aires was also crazy. Seriously, I had no idea that situations like that still went on in this country. Thankfully, I’ve never encountered anything like that. Megyn’s writing style is easy to read (unless she’s discussing the specifics of law, which seem like a foreign language…), it flows well, and is well written. I like the message of her book; it’s empowering. The title message comes from a Dr. Phil quote: “The only difference between you and someone you envy is, you settled for less.” So go out there and don’t settle, work until you get what you want! Her message also includes taking responsibility for your own product, actions, results, etc. The blame game is not productive. Another part of the message that I liked was that instead of worrying about things you can’t control (finding a boyfriend, getting a raise, the way other people think about you, etc.), “Put all of [that] energy back into yourself.” In other words, don’t worry about it or stress about it-just do the best you can do. Be the best you, and things will work out. Overall, I liked the book. She does highlight a lot of her successes, making it seem like she’s bragging a bit, but she also does talk about her failures. And, if you’ve gotten to where she’s gotten in life, and you’ve worked that hard to get there, then I think you deserve a small right to brag. 🙂
Rating: R (There’s quite a bit of profanity, including several “f” words. She doesn’t say them, but she’s quoting others who do. There isn’t any “intimacy,” and there isn’t any real violence, besides discussing stalkers and such. There are many adult themes as well.)
Recommendation: Adult