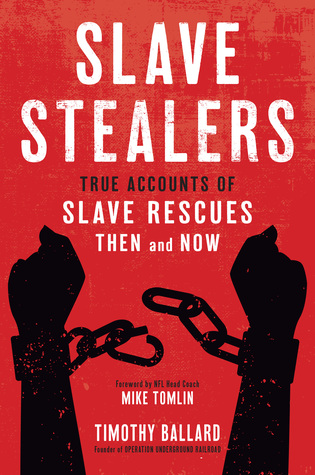 I have to admit that I have been naïve. I’ve heard of things going on, but I always thought that it couldn’t really be true. People can’t really be that evil, right? It only happens in the movies, right? Unfortunately, it does happen. Too often. And not necessarily in some faraway land; it’s happening all over the world. Children and women are being sold into slavery. But this slavery is a different kind of slavery from what we’ve learned and studied about. These women and children are being sold, yes sold, into human trafficking. It’s absolutely horrifying. Find out more in my book review of Slave Stealers by Timothy Ballard.

“In the 1800s American South, Harriet Jacobs is enslaved and tormented by a cruel master. He relentlessly attempts to force her into [an intimate] union, and, when rebuffed, he separates her from her children and spends a lifetime trying to coerce her and then recapture her when she escapes to freedom. Jacobs outwits her tormentor and eventually reunites with her children, works in the cause of abolition and reform, and helps newly freed slaves with education and aftercare.

In 2009, Timothy Ballard encounters a grieving father in Haiti whose three-year-old son has been kidnapped and sold into slavery along with thousands of children who were orphaned after an earthquake devastated the country. He pledges to track down the missing child and leaves his job at the Department of Homeland Security to establish Operation Underground Railroad to infiltrate black markets in human trafficking, liberate victims, and provide a comprehensive aftercare process involving justice and rehabilitation for survivors.

Slave Stealers alternates these two riveting stories, weaving them together to expose the persistent evil of trafficking and sexual exploitation that has existed for centuries—and inspiring us to find a way to end it. Filled with heartbreaks and triumphs, miracles and disappointments, hair-raising escapes and daring rescues, this gripping book provides insight to this terrible evil and the good that can be done when caring people step up and stand in the light.”

Wow. I read this book in two days. I couldn’t put it down. It pulls at every piece of humanity, motherhood, teacher, Christian, and sister that I have. And then some. I’ve read quite a bit about slavery and the Civil War, and I’m astonished every time by the brutality and inhumane treatment that the slaves endured. It’s incomprehensible. And then I learn that it’s happening today. Yes, today. And not in some place far, far away, but way too close to home. It may look slightly different, but there are many similarities between the transatlantic slavery of old and modern-day slavery.

I loved how Timothy Ballard wove the two stories together. It was seamless. It was powerful. Like everyone, I’ve heard of Harriet Tubman and Frederick Douglas. I have learned about Abraham Lincoln and Harriet Beecher Stowe. Unfortunately for me, I have not been as well acquainted with Harriet Jacobs. What a story! I loved hearing her story and learning about her. She was an amazing woman who inspires me to never give up, to stand up for my beliefs, and to take a stand against slavery.

Timothy Ballard also has an amazing story. He has seen and experienced so much. I also enjoyed learning about his story. He is such a good example of being a good citizen, of being compassionate, and of being aware of the needs of others. I love that he has dedicated his life to resurrecting the Underground Railroad. He uses many of the same principles today that the people who ran the original Underground Railroad used in the 1800s. His writing style just sucks you into the story. It brings the story to life.

Although old and modern-day slavery are heavy topics, Timothy Ballard does a great job of pulling out the inspirational moments. Instead of feeling weighed down and depressed after reading this book, I absolutely felt inspired. I want to help. I cannot imagine what those children and women have to endure, and Mr. Ballard has such a way with words that he broaches hard things and turns them into teaching moments. His writing is full of energy, it’s authentic, and it is bold. He doesn’t mince words, but it’s not off-putting; in fact, it has the opposite effect.

I thoroughly enjoyed getting to know the modern-day conductors of the Underground Railroad. Their stories are also powerful and vulnerable. It’s very telling how highly Mr. Ballard thinks of them. Once again, it’s inspiring to hear what many of them have overcome, and how they have reacted to those heartbreaking situations.

I loved this book so much! I’m so glad that I had the opportunity to read and review it. I highly recommend Slave Stealers by Timothy Ballard.

Rating: R (There isn’t any profanity in this book, but it’s discussing human trafficking and the sexual exploitation of children. It is full of adult themes.)