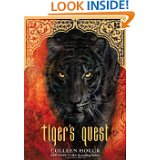 (Summary taken from the inside book jacket) “Kelsey Hayes’s eighteenth summer was crazy. The kind of crazy that nobody would ever believe. Aside from battling immortal sea monkeys and trekking the jungles of India, she fell in love with Ren, a 300-year-old prince. When danger suddenly forces Kelsey on another Indian quest with Ren’s bad-boy brother, Kishan, the unlikely duo begins to question their true destiny. Ren’s life hangs in the balance–and so does the truth within Kelsey’s heart. Tiger’s Quest, the thrilling second volume in the Tiger’s Curse series, brings the trio one step closer to breakin the ancient prophecy that binds them.”

I really liked this book. I didn’t love it as much as the first one, but I did really like it and am glad I read it. If you liked the first one you should definitely read this one. Like the first one, the whole premise is kind of corny, but you know what, you just go with it and it’s entertaining. This is a great book to read when you don’t want to think, you just want to be entertained. It is part “Indiana Jones,” part “Twilight,” and part fairy tale. It’s a fast, easy read, and is clean! It’s a great young adult book. There is an occasional kiss, but that is about all.  It’s fun and well written. I like Ms. Houck’s writing style because it flows well and is easy to read.

I like the characters in the story. Kelsey is a strong character, which I like, but she is also human. She does have a little bit more of Bella (from “Twilight”) in her in this book, but not enough to make you crazy. It’s more of a real, or natural, side of her. You learn a lot more about Kishan in this book and that was fun. He’s quite the character. Mr. Kadam I really like, and Ren, of course. I think girls will like this series more than boys will, but there are some action/adventure parts that boys will like too.

Rating: PG-13 (Once again, not for content, but it’s probably better for a little older young adult.)

Recommendation: 14 and up. Yay! A true young adult book! 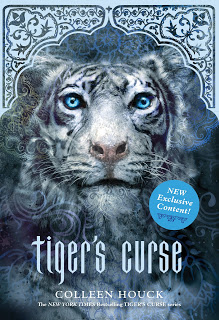 (Summary taken from inside book cover) “The last thing Kelsey Hayes thought she’d be doing this summer was trying to break a 300-year-old Indian curse. With a mysterious white tiger named Ren. Halfway around the world. But that’s exactly what happened. Face-to-face with dark forces, spell-binding magic, and mystical worlds where nothing is what it seems, Kelsey risks everything to piece together an ancient prophecy that could break the curse forever. Tiger’s Curse is the exciting first volume in an epic fantasy-romance that will leave you breathless and yearning for more.”

Boy, are those last words true. I’m dying! I want the next book and I want it now!!! I loved this book! The cover alone draws you in, right? The beautiful blue eyes just draw you in, and that is how the whole book is. Ren’s character, even though a tiger, is so intriguing. I had to keep reading to find out more about him. He is so mysterious, yet he wears his emotions on his sleeve (or fur) so to speak. At first I didn’t know how it would work with a tiger as a main character, but Ms. Houck did a really good job of making it seem real. Kelsey’s character is a mix between Catniss from Hunger Games and Bella from Twilight, along with some Clary from City of Bones. She’s tough and stubborn like Catniss and Clary. She can take care of herself and be strong, but at the same time, she’s got a Bella streak that drives me crazy. It’s almost opposite of Bella, but she handles it in a similar way. I screamed at Bella and I definitely screamed at Kelsey. Just imagine me reading at night when everyone is asleep and suddenly screaming, “You stupid girl……Ahhhhhhh!!!!!!”  She has been given this great thing (I won’t tell you what it is) and all she wants to do is get rid of it. It drove me crazy! But, I had to keep reading to see if she if she figured it all out. And…..well…..I’m not going to give away the ending except to say that you better just get book one and two at the same time. I also really like Mr. Kadam’s character. He is also shrouded in mystery, but he adds a lot to the book. I wasn’t so sure about him in the beginning. As a mom I had red flags shooting up everywhere warning danger, but………(I won’t ruin it).

This book reads easily and is well written. There are a few typos, but that’s all. I like Ms. Houck’s style of writing. It flows well and doesn’t tell you how to feel, but you feel it. I read it in just a few days, which is kind of unheard of at the moment. I could not put it down. And, I think I dreamt of tigers a few nights. Those eyes. (Thank you illustrator Cliff Nielsen)

And, it’s clean! There’s no language and no violence. There is a romance in the story and a lot of feelings expressed. There is a lot of kissing, but it doesn’t go further than that. There is some relationship tension which makes it a little inappropriate for really young readers. I don’t want my ten-year-old reading it, even though it is clean.

Rating: PG-13 Not for content really, because it is clean. There is that sexual tension and you think that it might go further than kissing (it doesn’t), but I just think it’s more appropriate for a little older reader.

Recommendation: 14-15 and up. You may want to read it (because it’s really good) to see whether or not it’s appropriate for your child. It may be okay for a really mature 13-year-old. I love it when I can say that this is actually a good Young Adult book!

Disclosure: I did receive a free copy of this book in exchange for my review. This does not sway my opinion as all my reviews are honest.