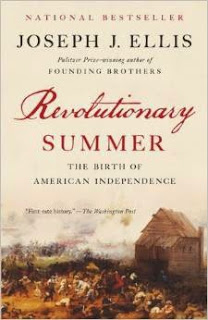 Blurb:
“A distinctive portrait of the crescendo moment in American history from the Pulitzer Prize-winning American historian Joseph J. Ellis. The summer months of 1776 witnessed the most consequential events in the story of our country’s founding. While the thirteen colonies came together and agreed to secede from the British Empire, the British were dispatching the largest armada ever to cross the Atlantic to crush the rebellion in the cradle. The Continental Congress and the Continental Army were forced to make decisions on the run, improvising as history congealed around them. In a brilliant and seamless narrative, Ellis meticulously examines the most influential figures in this propitious moment, including George Washington, John Adams, Thomas Jefferson, Benjamin Franklin, and Britain’s Admiral Lord Richard Howe and General William Howe. He weaves together the political and military experiences as two sides of a single story, showing how events on one front influenced outcomes on the other. Revolutionary Summer tells an old story in a new way, with freshness at once colorful and compelling.”
My Review:
By now you should all know how much I love American History. That is one of the reasons I slacked off my blogging at the beginning of the year. I took an American History college course so that I would have enough credit to renew my teaching license (yay!!). I have read 1776 a bunch of times, and I love it every time. Needless to say, I was really excited to read this book! It took me awhile to read it (hence my lack of blogging lately……), but it did not disappoint! It isn’t quite as easy to read as 1776 is, but it is still so well written. I loved how Mr. Ellis delved into the British side of it as well as the American side. It was interesting to learn the intentions and different strategies of the Howe brothers. I know I have heard about them before, but I really enjoyed getting into their heads a little more. I have to say, I am so glad that they made the atypical blunders and missteps that they did; it made our cause possible against such a formidable foe. This book went quite a bit into the politics of the day and how the political feeling of the day actually hindered our win. The people felt that a national army went against everything they were fighting for; therefore, the Continental Congress, even though they wanted a national army, was never able to actually provide General Washington with that luxury. Washington had to win the war with a piecemeal of state militias. The terms were about one year, and the personnel were constantly changing. Crazy! There were many things (I would say miracles, others may have another word for it…..) that had to come together in just the right way for us to win. Thankfully, it worked in our favor. This book is well written, very informative, and packed full of information. I learned a lot, and enjoyed reading it. If you are an American History fan like I am, then you definitely need to read this book, and if you aren’t, then you should still read it!

Rating: PG-13 (It’s war. It describes certain battles where many people died.It’s not overly graphic, but does spell out what happened during these battles.)

Recommendation: 14-15 years-old, depending on the YA’s maturity level. This book would be great for a history class. Every American should read this book so we remember where we came from and the lives that were lost to give us the freedoms we enjoy today.