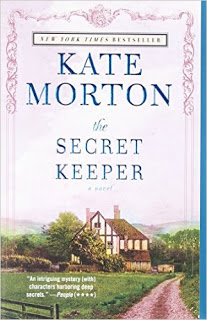 The Secret Keeper by Kate Morton

“During a party at the family farm in the English countryside, sixteen-year-old Laurel Nicolson has escaped to her childhood tree house and is dreaming of the future when she sees her mother speak to a stranger. Before the afternoon is over, Laurel will witness a shocking crime that challenges everything she knows about her family and especially her mother, Dorothy. Now, fifty years later, Laurel is a successful and well-regarded actress, living in London. She returns to the family farm for Dorothy’s ninetieth birthday and finds herself overwhelmed by questions she has not thought about for decades. From pre-WWII England through the Blitz, to the fifties and beyond, she begins to unearth the secret history of three strangers from vastly different worlds–Dorothy, Vivien, and Jimmy–who meet by chance in wartime London and whose lives are forever entwined. The Secret Keeper explores longings and dreams, the lengths people go to fulfill them, and the consequences they can have. It is a spellbinding mix of mystery, thievery, murder, and enduring love told in Morton’s signature style.”

I loved The Forgotten Garden by Kate Morton, and so I’ve been excited to read something else by her. Needless to say, I was really happy when my book group decided to read The Secret Keeper this month. I had high expectations, so I hoped this book would live up. Did it? Ummmm….yes, mostly. How’s that? Maybe it’s because I was reading a large print edition (it’s the only copy the library had), but it took me awhile to get into this book. However, as I read it I became more and more intrigued by this story. The characters were well developed and were real. They all had something in their past or present that made them imperfect, and more real-to-life. Each one had a story, and it was fascinating how the story unfolded and their lives became intertwined. Some of it was a little predictable, but there were some surprises and some “Aha!!” moments. I think the character I had the most difficult time relating to was the young Dorothy. Wow. She drove me crazy most of the time; with her fantasies, her vengeance, and her belief that she was so exceptional, I had a hard time with her. The older Dorothy, however, I understood. I can understand the devoted and happy wife and mother. Ms. Morton did a great job of tying it all together, and bringing it to life. Even though it was not a happy time in England, I did enjoy learning a little about WWII England. I wish I could see some of Jimmy’s photographs. I didn’t love the title of this book. I thought it was bland and could have been a little more creative. Overall, I enjoyed it. I didn’t like it as much as I liked The Forgotten Garden, but I enjoyed it and am glad that I read it.

There is some profanity in this book, but not a lot, really. There is some minor war violence, and some characters do die; there is a murder. There is also some domestic violence, and a brutal scene with that. There is an “intimacy” scene, along with some talk about it, and a few innuendos. The scene is a little detailed, but not overly so. Overall, I enjoyed this book and would recommend it with the above warnings.

Rating: R (This book is not appropriate for younger readers. There is war violence, with a murder and the death some characters, along with a domestic violence scene. There is some minor profanity. There is also an “intimacy” scene along with some talk about it and a few innuendos.)

Recommendation: 18 years-old and up

Throwback Thursday
This review was originally posted on 3/1/12. I loved this book!!! 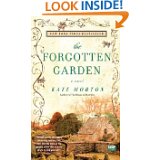 The Forgotten Garden by Kate Morton

(Summary taken from the inside book jacket) “A tiny girl is abandoned on a ship headed for Australia in 1913. She arrives completely alone with nothing but a small suitcase containing a few clothes and a single book–a beautiful volume of fairy tales. She is taken in by the dockmaster and his wife and raised as their own. On her twenty-first birthday they tell her the truth, and with her sense of self shattered and with very little to on on, “Nell” sets out on a journey to England to try to trace her story, to find her real identity. Her quest leads her to Blackhurst Manor on the Cornish coast and the secrets of the doomed Mountrachet family. But it is not until her granddaughter, Cassandra, takes up the search after Nell’s death that all the pieces of the puzzle are assembled. At Cliff Cottage, on the grounds of Blackhurst Manor, Cassandra discovers the forgotten garden of the book’s title and is able to unlock the secrets of the beautiful book of fairy tales.”

I loved this book! It is very well written and so engaging. It is a little confusing at first trying to figure out who goes to what time period, but in the end it comes together seamlessly. I loved the story and I loved the characters. The storyline is intricate and intimate. The characters are well developed and I felt as though I knew them personally, as if I were on the journey with them. I’m not usually one to try and figure out what happens, I usually just like to read and enjoy the book. With this story, however, I would lie in bed at night trying to piece it together. I would think I had it figured out and then the characters would say or do something that would make me think otherwise. And the cycle continued. In the end, I had a lot of it pieced together, but there were some twists thrown in the end that I hadn’t anticipated.

I thought a lot about family and self worth while reading this book. If I suddenly found out I wasn’t who my family said I was, would it change my relationships with them? Blood doesn’t change who loves you and takes care of you does it? I’m sure I could see myself trying to find my blood relations, but I don’t think I would distance myself like Nell did. Anyway, that was really interesting how each character reacted. I liked that in trying to find Nell, Cassandra was able to find and heal herself as well. I really liked the romantic touch weaved through the story. I found it was interesting how different people saw the same evidence differently, and I liked how the storyline continued through different times and people and never skipped a beat. It was mostly clean. There were a few words throughout, and there was a scene that involved “physical intimacy” of two unmarried people. That whole part of the story is strange, but I guess fits. It definitely made me uncomfortable.

I highly recommend this book! It made me think a lot about how the choices we make not only affect us, but they affect those around us, and they can sometimes set in motion a chain of events we would never have anticipated. Thank you, Ms. Morton, for a very good read!

Rating: PG-13 (Death of a few characters, some language, and “physical intimacy.”)

Recommendation: Senior in High School and up. This is a tricky one. Because of the nature of the “physical intimacy” scene (It doesn’t go into a ton of detail, it’s just the people who are doing it and why they are doing it.), I think the reader should be a little more mature. As an adult, don’t let this description stop you from reading it. I promise, the rest of the book is fabulous and makes up for it.