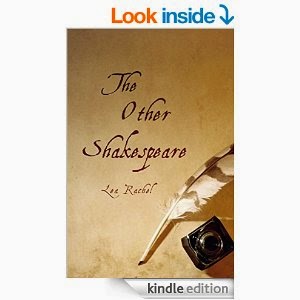 The Other Shakespeare by Lea Rachel
Blurb:
“What if Shakespeare had been born a woman? What would have happened to her? And, what would she have accomplished? Virginia Woolf first posed these questions in her acclaimed novel A Room of One’s Own…and now maverick author Lea Rachel steps up to tell the rest of the story. The Other Shakespeare carries readers back to the sixteenth century to follow Judith Shakespeare, the older sister of William, as she tries to make a name for herself in a male-dominated society that consistently denies women their independence. Born with as much talent, creativity, and drive as her younger brother, she is stifled by the world around her and ultimately resorts to extreme measures to get accepted and have her talent recognized. Judith’s story is rich with history, conflict, and drama and is sure to appeal to fans of Virginia Woolf, William Shakespeare, and character-driven fiction.”

I love reading Shakespeare, so I was excited to read this book. Ms. Rachel did a good job developing the characters in this book. The Shakespeare family, especially, is well developed. You know exactly where they stand on certain issues, and they seem to go well with what I would expect of the time period. I liked William and Mrs. Mountjoy the best. I didn’t really like Judith, which isn’t great since she’s the main character. I thought she was whiny, dramatic, arrogant, naive, and foolish. I liked her more at the beginning, when she and her siblings would play-act outside. After awhile, though, I started liking her less and less. I’m taking a college history class right now so that I can renew my teaching license, and this week I learned about presentism. Presentism is when we look at the past through today’s values, standards, knowledge, etc., and pass judgment on those in the past because of that. It was kind of funny because I know I did that through this entire book. I definitely looked at Judith, and especially the men in the story, that way. I know I shouldn’t because times were very different back then. This book was okay. It wasn’t what I expected, which is fine. However, it just didn’t click for me. I didn’t like Judith at all. I didn’t think it flowed well, and it seemed forced to me. Most of the book is written in “normal” (as in not Shakespearean) language, and then all of a sudden she would insert a quote or a line or two from one of Shakespeare’s plays, and I didn’t think it worked. It seemed forced to me. She would also put a few “anon’s” in to make it try to work, but not all of it was written that way; it was inconsistent. It made it seem a little corny too. I wanted to like this book, but it just didn’t work for me. There were some good things that came out of it though. Looking at the very few opportunities Judith had definitely made me grateful to be a woman today and not back then. My mom tells me stories of not being able to wear pants to school, and I’ve heard stories of women trying to prove themselves even fifty years ago. Today’s world is very different, and I’m thankful for all the women that have gone before me who were trailblazers, and who helped changed the status quo for women in our country.

There is profanity in this book. There is a rape scene, and at least one “intimacy” scene. “Intimacy” is talked about as well. There are also a couple character deaths in this book. There are a few situations in this story that have Shakespearean resolutions. I don’t want to give anything away, so that is all I’ll say, but they were fitting for the story.

Rating: R (This book is not appropriate for younger readers. Profanity, rape, “intimacy,” and a couple of character deaths.)

Recommendation: 17-18 years and up