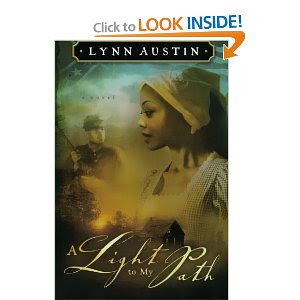 A Light To My Path by Lynn Austin
(Summary taken from amazon.com) “Kitty, a house slave, always figured it was easiest to do what she’d always done–obey Missy and follow orders. But when word arrives that the Yankees are coming, Kitty is faced with a decision: will she continue to follow the bidding of her owners, or will she embrace this chance for freedom? Never allowed to have ideas of her own, Kitty is overwhelmed by the magnitude of her decision. Yet it is her hope to find the “happy ever after” ending to her life–and to follow Grady, whom she loves–that is the driving force behind her choice. Where will it lead her?”

My book group chose to read this book this month, and I am so glad they did. I love Ms. Austin’s writing! I loved it in A Woman’s Place, and I loved it in this book. Her writing is so real in this book. The images she portrays with her words are so vivid and full of life. I got sucked in from the first page, and I only put it down when I had to feed my kids or sleep….you know, the important things. Of course, as you all probably know by now, I love American history, especially the Revolutionary and Civil Wars. So, any historical fiction around these times usually piques my interest. It took me a few chapters to figure out which characters belonged to which city and time, but once I did, it wasn’t a problem. From there I just fell in love with some of the characters and absolutely detested others. There were definitely some very extreme emotions there. I hated white people (and I am one) throughout most of this book. Their actions made me physically ill and very angry. The extreme hatred and anger that Grady carried in this book transferred to me. Missy Claire, Missus Goodman, Coop…..nope, didn’t like them at all. However, Anna, Delia, Joe (soldier), a bunch of military personnel, and even Massa Fuller, at times, I really liked. I had a very difficult time with Grady throughout a good portion of the book. His anger and hatred are contrary to my personality, and I felt bad for him, but I also didn’t trust him. I didn’t want Anna around him at all in the beginning. The character development in this book is very well done. Whether I liked them or not, I felt like I had known them all for a long time.

The story may be quite depressing a lot of the time, (It reminded me a lot of The Kitchen House) but there is so much to gain from this book. The lessons that Grady and the other slaves learned through their experiences are lessons we all need to learn. Holding on to anger and hatred and revenge only ends up hurting us in the end. Learning to forgive is difficult, but through forgiveness we gain freedom from the burden of hatred. There is also a lesson of faith in something greater than yourself, and also faith in yourself. Surrounding yourself with good people, and the help that others can give you during difficult times are also wonderful lessons to learn. The power that music has to heal and bring out different emotions at different times in our lives has a big part in the book. There are some things in this book that are hard to read because of their harshness, and because of the emotions they provoke in the reader. This is a book about the reality of slavery in early American history, and it isn’t a pretty, happy fairy tale. It’s awful and painful to read about. However, I think it is important that we all remember what took place so that we can make sure it doesn’t happen ever again. To anyone. It’s important to look at the way we treat the people around us and be a little more patient, a little more kind, and a little more understanding. It’s also important to stand up for what we believe in, and help those around us that have fallen on hard times. Even though it provoked a lot of negative emotions, I did like this book. The growth that takes place in the characters is amazing, and made it worth the read.

Rating: R (This doesn’t follow the movie ratings exactly, it is my way of saying that it is not appropriate for younger readers.) Rape, murder, mistreatment of slaves, war, and other atrocities. Minor profanity.

A Woman’s Place by Lynn Austin

(Summary taken from the inside book jacket) “Virginia Mitchell watched her husband carve the Sunday pot roast and wondered if he was having an affair. He showed more interest in the way the meat was cooked than he did in her. But maybe it was better if she didn’t know for certain. This way she wouldn’t be forced to decide whether to live with the knowledge in silence, forgive him, or leave him. She found it difficult enough to decide what to fix for dinner, let alone wrestle with questions of infidelity and trust….Virginia’s insecurity regarding her marriage casts a pall over her future. But with the devastating news of America’s entrance into WWII. Ginny feels called to make a difference. As she embarks on this journey, she’ll meet three other women–and in the process, change her world.”)

I liked this book a lot. I found it so interesting to learn about these four (and later on, a fifth) women and their lives. I liked how their lives intertwined, and how they forged friendships and also how they forged a way for women into the workplace during the WWII era. I liked each of the characters, and felt as if I could walk into their world and fit right in. It did take me awhile to get them straight, and remember who was who, but by the end they felt like my friends. I liked how each of them dealt with her own trials, and yet they all faced many of the same trials together. They helped each other, and came to rely on each other. The men in the book made me furious. I did like Earl. Ginny’s husband drove me crazy! And the men workers at the factory were awful. I found it difficult to believe that some of those problems existed in the 1940’s. I knew women worked during WWII because I have seen the Rosie the Riveter poster:

but I’d never thought about how that made the men feel, or what those women did once the war was over. I enjoyed this book and recommend it.

The writing style is hard to get used to at the beginning, but becomes easier by the end. It is a little slow in some parts, but it was engaging enough to keep me reading. There are some scenes in the book that are difficult to read because of the way the people were treated. There is some harsh racial violence (beatings, and a terrible “accident”) and you learn of characters dying in the war. There is some language. One of the characters has a habit of drinking and getting drunk. There is a little bit of a Christian message in the book because a couple of the characters discuss God and His influence in their lives.

Recommendation: High School and Up. I took a Women’s History class in high school, and this would have been a great read for that class. It is fiction, but it’s great to see a different viewpoint of WWII.